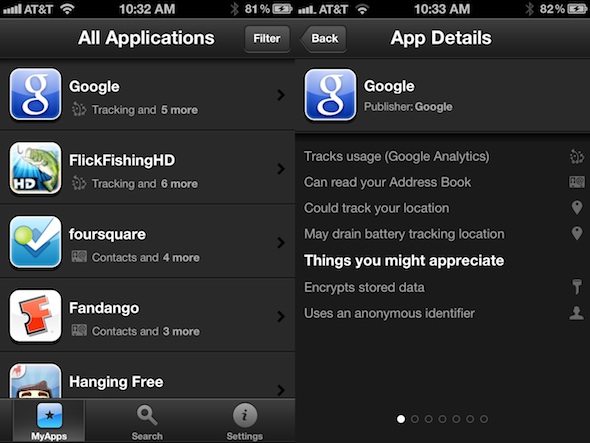 It’s not uncommon for Apple to pull applications from its App Store without word or warning. Let’s just say the company doesn’t take security on its mobile platform lightly.

Typically, the removals are warranted. The apps are either malicious, violate copyright laws or other App Store guidelines. But with titles like Clueful, it’s not so cut and dry…

Clueful, by Bitdefender, is an iOS app that gives users an inside look at the information other apps are collecting behind their backs. And it identifies intrusive titles, so users can remove them or otherwise act accordingly.

“App developers can ask for, and receive, access to your precise location, your contact list and more information about you when you install their products on your iPhone. Your iPhone is probably the most personal device you own, holding vast amounts of information about what you do, who you are and where you go.

While most app developers use this information for legitimate purposes, others might not. Clueful was the best way for iPhone owners to know what data apps are actually accessing.”

The app sounds honest enough, but obviously Apple had some issues with it. Word starting spreading around the internet yesterday that the company had pulled the privacy app without giving Bitdefender much of an explanation.

“Apple informed Bitdefender’s product development team of the removal — for reasons the company is studying — after initial approval and sale in the App Store,” the company said in a statement Wednesday.”

The removal comes at an interesting time, as Apple has experienced a number of privacy issues this year. It’s even gone so far as to add new privacy control features in iOS 6, in an effort to combat the problem.

And that, in itself, sounds like a good enough reason for Apple to pull Clueful from the App Store. The last thing the company needs right now is an application pointing out more potential security issues to the general public.

What’s your take on this? Was Apple right to pull the app?