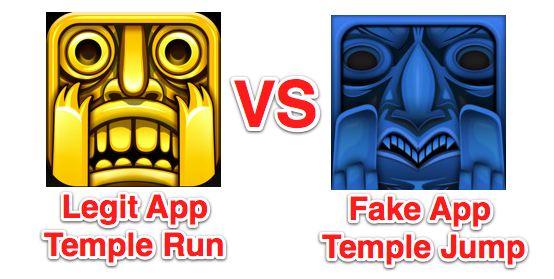 Even with Apple’s notoriously strict approval process, misleading applications constantly make their way into the App Store. We’ve covered a number of these titles on iDB — most recently Craft-Build Terrain, a fake MineCraft game.

These fraudulent applications have been making some serious waves in the developer community over the last few weeks. Developers believe these apps give their titles, and the App Store in general, a bad name. And Apple has responded…

TechCrunch is reporting that Apple has removed several misleading applications from the US App Store over the past few days, including Angry Ninja Birds, Tiny Birds, and Numbers With Friends. The move appears to be in direct response to developer complaints, who have recently become rather vocal about the subject. And for good reason.

Last week, Temple Jump, an obvious knockoff of the popular game Temple Run, made its way to the top of the App Store’s Paid Apps list. Users downloaded the game thinking it was part of the Temple Run series, but were met with major disappointment

Even though it’s good to hear that Apple is actively weeding out these types of applications from its App Store, we imagine we’ll continue to see them. So double check your apps before downloading, and stay tuned to iDB for future warnings.

What’s your take on these misleading apps? Are they becoming a real problem?