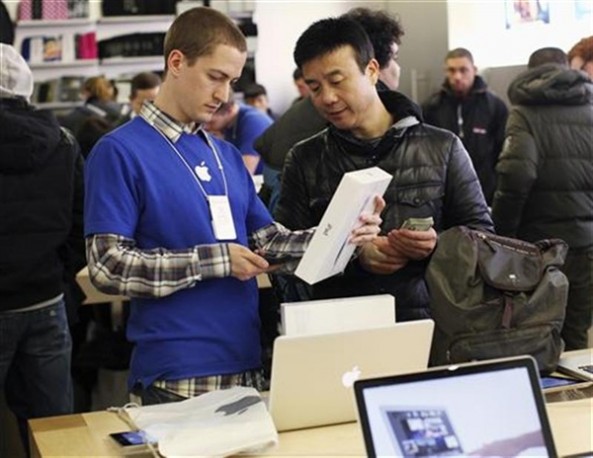 Ron Johnson just can’t escape his past as Apple’s widely successful head of retail. He left Apple last November to join the struggling retailer J.C. Penney and apply some Apple magic to its mid-range department stores. Johnson was interviewed by Fortune’s Jennifer Reingold and of course the inevitable questions of his work at Apple popped up, among the many other topics of conversations. Here’s what came out of him…

According to Johnson’s one-on-one with Fortune’s Jennifer Reingold (full transcript via Philip Elmer-DeWitt), when he joined Apple in 2000 the company was a much different place than it is today. Apple’s revenues dropped 38 percent from 2001 and in 2004 the stock was below where he joined in 2000.

When I joined Apple in 2000, I came from a physical retailer, Target, and people thought I was crazy to go to Apple, because at that time Apple was losing market share. Gateway was closing stores.

So why join then?

You knew that Apple had a great future because of the tech revolution that was coming, with the Internet and the digital world. So I wanted to be a part of that, and the time at Apple though taught me that ultimately, the physical store has as important place in a connected world.

He also explains why folks choose to buy stuff at Apple Stores even though they can get their Apple gear cheaper elsewhere:

You can get every Apple product every day cheaper at Amazon, many times elsewhere. But people come to the store, and that’s because the store offers something people need, which is really help and support and connecting, because I think there’s always been this idea in a high tech world, people really strive for high touch.

So we go to the Apple store to feel the people and experience the connection. On Apple Stores being “magnets for people”:

So there’s these connections that are really necessary in a digital world because you want that offset of the physical world. You want that physical experience.

He also interestingly mentions that despite Apple creating “the most easy, out of the box user experience”, the company noticed that “it took eight days for the average person to buy a product and set it up”.

People were hesitant to use their new toys because they got intimidated by technology back in the old days. So Apple started setting up customers’ newly purchased items right there, inside the stores, so they could walk away with fully usable products.

That was an insight that really made the Apple store relevant, versus buying online.

He also remarks that people didn’t like the Genius bar right away:

When we launched the Genius bar years ago, nobody came. I mean literally after a year and a half, a lot of people at Apple said why don’t you close that down? We had to put in Evian bottles of water in refrigerators to get people to spend time at the bar.

And what was the criteria to hire a genius?

They had to do two things. They had to be able to go toe to toe with Steve Jobs on technology. And the Ritz Carlton would be fighting to hire them for their hotels.

That was it, very simple. So these people had to have the confidence that they could debate technology with Steve, but they had the service skills you’d find at the Ritz.

On the customer being at the center of the Apple experience and why mind share always precedes market share:

Look in their heart, not their pocketbook. Spend whatever time it takes, and we already have the trust or confidence that they’ll buy. Most often, customers will honor the store that’s delivering the service.

But if someone wants to leave, let them go, because Apple cared deeply about its channel partners. We want them to be successful as well. You know, as long as someone buys an Apple product, Apple’s prospering. Maybe not at the same rate, but in the long run, you’ll earn better profits.

The Apple Store concept under Johnson’s guidance went on to become the most productive retail chain in the world, raking in more revenue than Tiffany’s and inspiring other people’s stores. And the last October’s launch of the iPhone 4S pushed Apple Store sales through the roof.

Apple named former head of Dixons John Browett its new senior vice president of retail back in January. Browett’s got some big shoes to fill, that’s for sure, and he already made some moves.

But Browett also has to double-down on Apple’s retail efforts in China, where the company operates only six stores for an average of 216 million customers per store in the 1.33 billion people market.

What do you think, will Apple Stores under Browett’s guidance continue to be the shrines of technology?