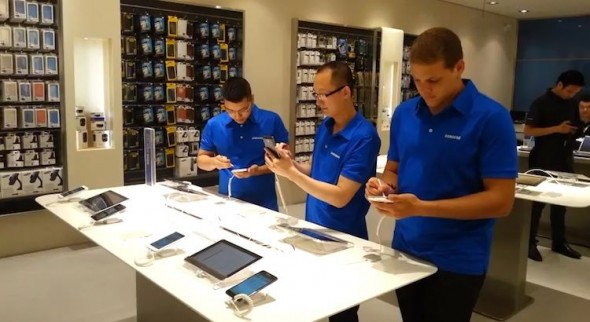 There was a graphic that started circulating the internet several months back, demonstrating how Apple has affected the smartphone industry. It showed what handsets looked like before and after the original iPhone was released. And the differences were tremendous.

There was a similar image that showed how Apple has impacted the tablet market. Before the iPad, tablets were 2-3-inches thick, had styluses, and ran desktop operating systems. And then after it, they all became thin, multi-touch tablets running mobile software.

Samsung has just opened its first retail store in North America. And, as BriefMobile points out, it looks an awful lot like an Apple Store. Don’t believe us? Watch this video from the store’s opening:

Even if you ignore the fact that Samsung has all of its tablets and smartphones laid out on white tables, or the fact that there are employees walking around in blue shirts, you still have to admit that it looks a lot like an Apple Store. From the all-white promotional signs, to the embedded accessory walls, to the group sales counter at the back of the room — it all screams Apple.

And Samsung’s not alone here. In fact, there are a number of retail chains looking to remodel the interiors of their stores to mimic the inside of Apple’s gadget havens. Back in March, Best Buy announced a new “Connected Store” strategy, set to debut later this year, that involves such a makeover. And Verizon is planning a similar redesign for its stores.

Given the success that Apple has seen with its retail business, it’s easy to see why other companies would want to try and emulate it. And hey, if that means that in the future, all stores will have a knowledgeable sales staff and a quick and painless checkout process, we’re all for it.