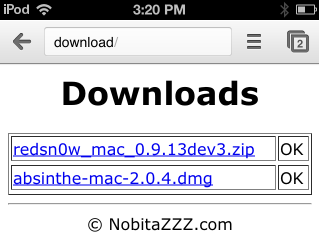 Just a few minutes ago, a new tweak entitled Chrome Download Enabler appeared on Cydia. Excited about the prospect of finally being able to download files via the Google Chrome Browser on iOS, I quickly paid the somewhat steep $2.00 asking fare, and jumped in.

What did I find? Chrome Download Enabler works well, allowing you to download files that you ordinarily wouldn’t be able to in Google Chrome. It’s not pretty like Safari Download Manager, but as you’ll see in the following video walkthrough, it does get the job done…

Chrome Download Manager is an absolute bare bones tweak that allows you to do one thing and one thing only — download files. There’s no file management, and there’s not even a way, from an interface standpoint, to access the download landing place, or to manage files that have already been downloaded.

Once you download a file via Chrome using this tweak, you’re brought to the landing page where you’re given a status of the download. It updates this status by means of refreshing a fairly crude and basic page with a link to your download that opens via iFile.

In other words, don’t expect flowers and roses with this tweak, but do expect function — something that can get the job done in a crunch.

Admittedly, $2.00 (ModMyi) is a high price to pay for something that has absolutely no options and is designed as basic as it is, but at this point in the game, it’s the only option for Chrome users who want to download files.

Would you consider buying it? Let me know what you think in the comments below.