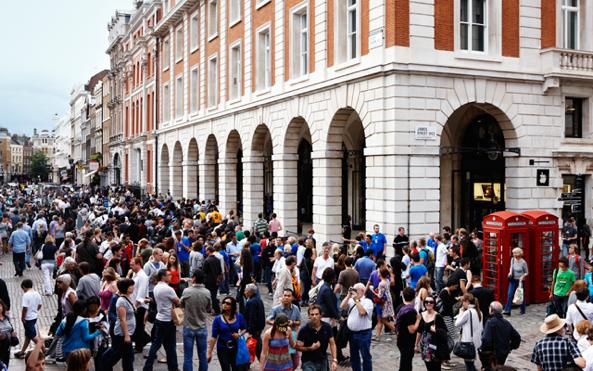 A bunch of numbers have been tossed around thus far to illustrate how valuable the iOS ecosystem and its users are to Apple, but this tops it all. According to none other than Goldman Sachs, a total combined value of the iPhone and iPad customer base is nearly $295 billion (you read that right).

Talk about the value of loyalty! The figure represents more than half the Apple’s value of $543 billion and easily exceeds market capitalization of Microsoft ($256 billion), Google ($188 billion) or IBM ($225 billion)…

And why you should care?

Unlike past surveys that tend to focus on traditional business metrics (units sold, ASP, margins and so forth), this is the first credible estimate to put a realistic dollar value on an important intangible, the iOS user base.

Apple’s June quarter ends this Saturday and Goldman Sachs’ Bill Shope estimated that by then the installed base of iOS customers will exceed 281 million, a cool 72 percent year-over-year increase.

Philip Elmer-DeWitt over at the Fortune blog relayed Shope’s findings, and here are the most interesting takeaways:

• the lifetime value to Apple of each iOS customer is $1,053
• the cost of switching to another platform (music, apps and other content) is pegged at an average of $122 to $301 per device
• 94% are likely or highly likely to stay within the Apple ecosystem
• more than one in five said there isn’t a discount high enough to persuade them to switch
• multiply 281 million users by the lifetime value of $1,053 each and you get a roughly $295 billion value for Apple’s installed base

This is some solid math, no?

And the most telling factoid of all, this $295 billion value “is before taking into consideration Apple’s $110 billion cash balance, the rapid growth of the installed base, the value of the Macintosh and traditional iPod businesses, and the related content, services and peripherals streams”.

I would be eager to learn about the value of Android’s installed base as this would help put things in perspective. There is no doubt in my mind that Android’s largely ad-driven ecosystem which promotes the free-everything mantra actually discourages people from paying for quality.

I really am not surprised that 20 percent of iOS users wouldn’t consider a switch regardless of the discounted Android ecosystem. The Apple pull is strong and the expanding Apple digital grid led another analyst to conclude that Apple shouldn’t worry about Google’s new tablet.

Before you hit the comments, please note that I am both Apple’s and Google’s bitch: I own an iPhone 4S and iPad 3 as well as a Galaxy Nexus smartphone. 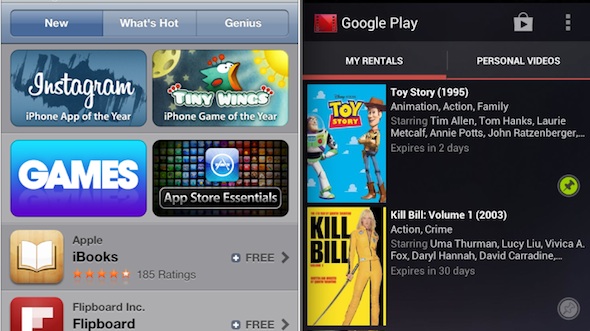 This isn’t about Google’s new Android 4.1 Jelly Bean software (which looks polished and snappy) nor is it about the attractive $199 Nexus 7 tablet or that overpriced Nexus Q media streaming orb.

To me, the most interesting bit was the addition of movies, television shows and magazines to Google’s app store, making it more of a digital media store.

Forget about iOS vs. Android, this battle is now between iTunes and Google Play and its winner will determine who’s gonna become the dominant one-click entertainment shopping mall on the Internet.