Google I/O is underway at San Francisco’s Moscone West and the company just shared a few interesting tidbits related to the momentum of its Android platform, announcing total activations of over four hundred million devices as of June of this year.

This means that a whopping 300 million new activations have been added over the past twelve months. On the surface, the number seems to compare favorably versus the 365 million cumulative iOS device sales Apple reported at WWDC earlier this month…

Google boasted a million daily Android activations, equalling to an average of twelve new Android devices each second of every day (nearly a million each day). It’s interesting that Apple stopped reporting its activation numbers.

However, there is a difference between the total number of iOS device units moved and Android activations, which include software upgrades on existing devices and carriers’ contract renewals.

That said, it wouldn’t surprise us if Android now sold more units cumulatively compared to iOS devices as Google’s mobile operating system is a multi-channel, multi-carrier platform that involve hundreds of carriers worldwide, a wide gamut of price points and form factors and dozens of vendors who manufacture Android tablets, smartphones, set-top boxes and a range of other connected devices.

The search company also says more than a million NFC devices are shipping every week, “and that number is growing quickly”. Per rumor-mill and some solid industry sources, NFC is coming to the next iPhone in a big way.

Google execs also made a point of highlighting how quickly Android is taking off in certain markets. For example, Android grew as much as 300 percent in countries like Japan, South Korea and France, as seen in the heatmap below. 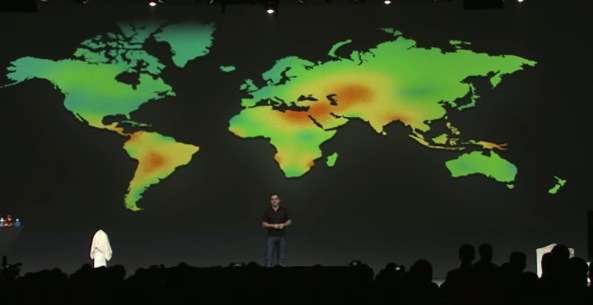 It’s rising even faster in Brazil, India, Tailand and Indonesia, where Android devices grew over 500 percent over the last year. You can watch the Google I/O 2012 keynote live on YouTube.

Should Apple be worried about total Android activations just as the iPhone’s fifth anniversary is due this Friday?