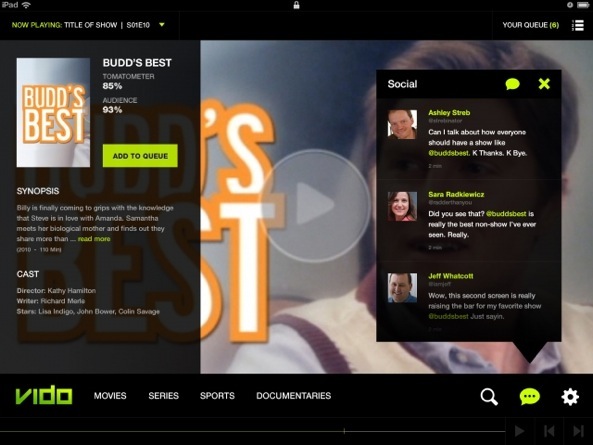 The epic battle for the living room is about to get a lot more interesting in a matter of days. Brightcove, a Cambridge, Massachusetts-headquartered online video platform provider, today released its App Cloud platform on an open-source basis. The SDK lets content owners create dual-screen apps that stream high-definition video to a television set through an Apple TV and AirPlay protocol.

While streaming, these apps can render a bunch of useful information on your iPhone or iPad, turning your iOS device into a glorified remote control of sorts. Meanwhile, Google is expected to issue a significant update to the Google TV platform at its upcoming developers conference tomorrow, said to give the Apple TV a run for its money…

According to TechCrunch, the App Cloud Dual-Screen Solution is a set of APIs for iOS and Android devices that will allow tablet and mobile users to have a truly integrated second screen experience.

By leveraging Apple’s AirPlay technology, App Cloud users can create applications that use the mobile device as the search and navigation, while the Apple TV plays back video.

Unlike other apps that simply incorporate AirPlay, a media streaming technology from Apple, to beam video wirelessly to your television set through an Apple TV hockey puck, Brightcove’s solution facilitates the creation of apps that use your iPhone or iPad to control the experience and display program information while streaming content to your telly.

And when OS X Mountain Lion gets out of the gate late next month, dual-screen apps built on the Brightcove platform will support Macs as well.

Brightcove founder, chairman and CEO Jeremy Allaire is brimming with enthusiasm, telling The Verge how his company’s platform will redefine the television experience:

The mythical Apple television set that everyone talks about is already here. Airplay is the trojan horse that has put connected TVs into every household with a iPhone or an iPad.

It’s a repeat of his stance shared recently in an AllThingsD column where he opined that a rumored Apple television set should be treated as yet another screen to run the enhanced iOS computing platform.

With Apple TV, cable content is just an app. What matters is that soon potentially tens of millions of HD capable monitors will become a screen for the hundreds of thousands of apps running on devices that are already in your hands.

AirPlay is increasingly becoming the key to Apple’s connected devices experience. Venuter capitalist David Packman hints that Apple is about to take AirPlay to the next level:

The stuff I have heard about recently, what they are working on with Airplay, just makes my head spin. With Airplay, all the pieces of the puzzle are in place in a way that simply isn’t true for any other big tech company.

Microsoft, which has a strong living room presence with its Xbox console, is also introducing a similar media streaming technology with the Surface tablet, dubbed SmartGlass (The Verge has a nice overview here).

And Google, which makes the Google TV software that runs on set-top boxes, will allegedly unveil a major new version at the Google I/O conference, which kicks off with a keynote tomorrow. A new Google TV website went live yesterday evening.

Fox News corespondent Clayton Morris has it from “people familiar with the keynote” that a Google TV revision will combine television, DVR and Netflix interfaces into one seamless experience that will let you browse and watch your content anywhere without having to search for it.

It’s interesting to point out that Google chairman Eric Schmidt said a year ago that “Google TV will be “embedded in the majority of new TVs by summer of 2012”. Remember that Schmidt made a similar bullish comment about Android which also failed to materialize.

By the way, AllThingsD sums up Google’s failed promises in a piece titled What Google Promised Last Year At Google I/O And What The Heck Happened.

Of course, a feature akin to AirPlay is also allegedly in the works for the new Google TV software update, allowing users to beam content from their smartphones to a Google TV box. Google is also expected to update APIs to allow developer to write more sophisticated apps for the Google TV.

Unfortunately, whispers that Apple would announce a similar SDK for the Apple TV at its developers conference in San Francisco failed to materialize.

Analyst Gene Munster, the biggest proponent of the iTV, has it that Cupertino will announce a full-blown HD TV set in December and begin selling it six months later.

We have yet to hear any solid piece of evidence that Apple is gearing up to manufacture big screen TVs, excluding Foxconn going to bed with Sharp which, for all we know, could simply enable Foxconn to compete with its arch-rival Samsung on flat panels.

What do you think, is Apple getting left behind because it didn’t open up the set-top box to third-party developers?

Let’s face it, the $99 hockey puck is pretty useless unless you jailbreak.