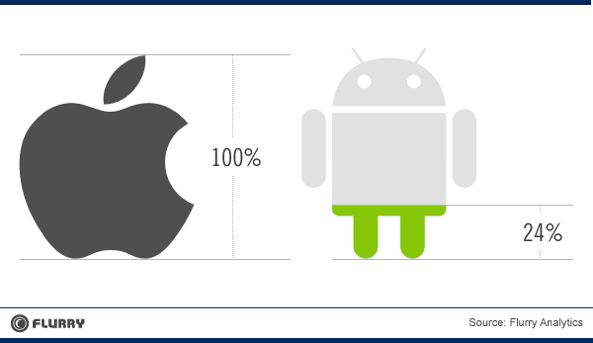 Though Android continues to lead the pack in terms of shipments, the iOS train just keeps on chugging along in terms of loyalty and profitability.

Seven out of ten mobile apps in the first five months of this year were built for Apple’s platform, where developers on average earn four times more revenue…

Note: don’t interpret this as a hate post. We’ll always be for competition. I’ve been heavily investing into Apple and Google platforms over the years and am loving both my Galaxy Nexus and iPhone 4S.

First on that Schmidt quote from the LeWeb conference last December, via CNET:

Ultimately, application vendors are driven by volume, and volume is favored by the open approach Google is taking.

There are so many manufacturers working so hard to distribute Android phones globally that whether you like Ice Cream Sandwich (ICS) or not – and again I like it a great deal – you will want to develop for that platform, and perhaps even first.

Responding to a question from an Android-toting audience member who was frustrated with iPhone exclusives, Schmidt said (and this is gold):

My prediction is that six months from now you’ll say the opposite.

Time for a reality check.

First up, seven months into Ice Cream Sandwich and this latest and greatest Android software is only found on 7.1 percent of Android phones. iOS 5 is reportedly found on up to 80 percent of active iOS devices.

I’ll get to the ‘why’ of such a disappointing ICS uptake in a second. 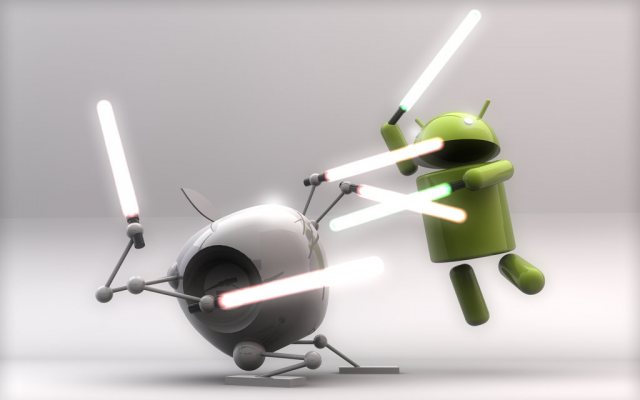 This great illustration courtesy of TechCrunch

For every 10 apps that developers build, roughly seven are for iOS.

This is a chart showing developers interest in terms of new project starts. 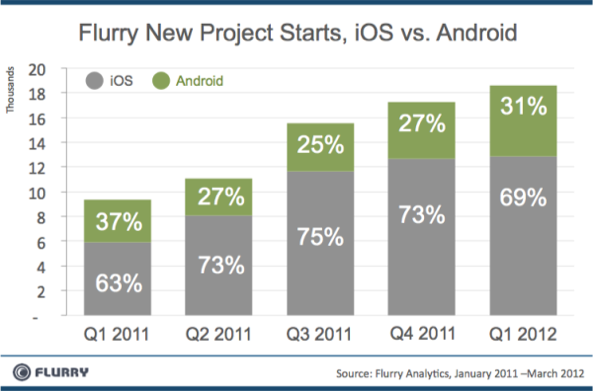 The reason for the four percentage points drop in iOS interest since the holiday quarter:

While Google made some gains in Q1 2012, edging up to over 30 percent for the first time in a year, we believe this is largely due to seasonality, as Apple traditionally experiences a spike in developer support leading up to the holiday season.

So, why do those right-minded programmers favor Apple’s platform?

For the same reasons as before: money and fragmentation.

Developers earn on Apple’s platform four times the Android revenue, per Flurry. Or, for every dollar earned on iOS developers can expect to make 24-cents on Android.

Flurry sums it up nicely.

Android delivers less gain and more pain than iOS, which we believe is the key reason 7 out of every 10 apps built in the new economy are for iOS instead of Android.

I’ve opined before that Android-toting users aren’t accustomed to paying for quality as Google’s ecosystem is largely ad-driven.

What’s even more telling is that Flurry’s findings are fairly consistent with their research published just a week after Schmidt had made his outrageous claim.

So here we are six months later and Schmidt’s douchebag critique of iOS has proven terribly off base.

I wonder how this executive feels about his reputation knowing the overwhelming majority of developers pledge allegiance to Apple’s platform. 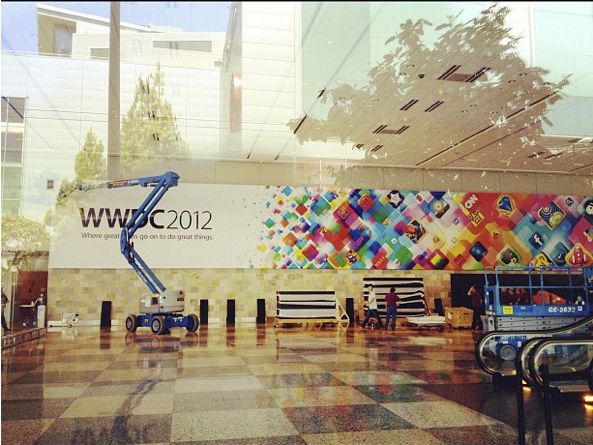 WWDC 2012 banner: “where great apps go on to do great things”

Yes, the iPhone lost a few exclusives as popular apps like Path, Instagram, Instapaper got ported over to Android.

It’s nothing to write home about: developers are entitled to target whichever platform they choose in order maximize their revenue. 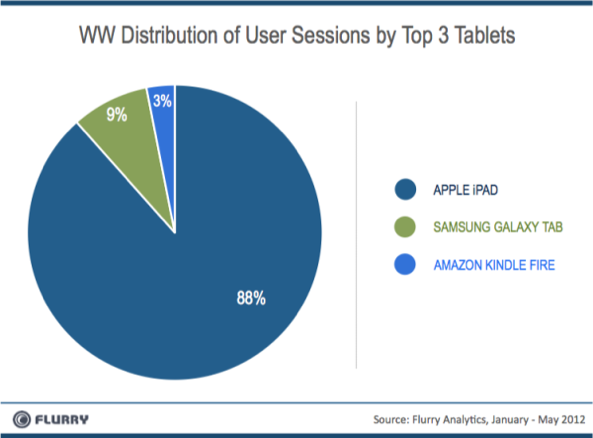 With the tablet market belonging to Apple, no wonder the iPad accounted for a whopping 88 percent of all tablet user sessions. The remaining twelve percent gets distributed between Samsung’s Galaxy Tab (nine percent) and Amazon’s Kindle Fire (three percent).

Here below we see fragmentation by Android firmware. 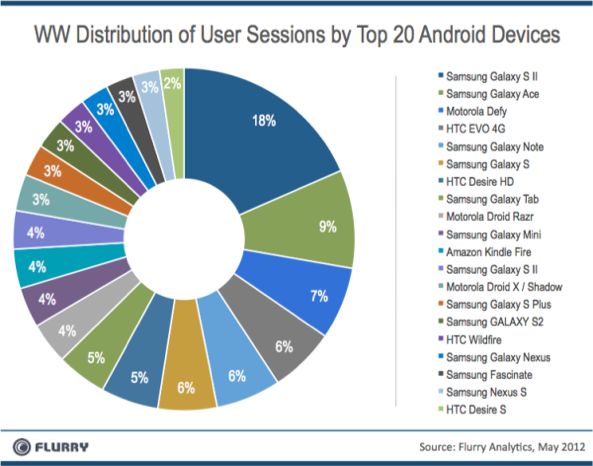 Another one depicting Android firmware fragmentation. 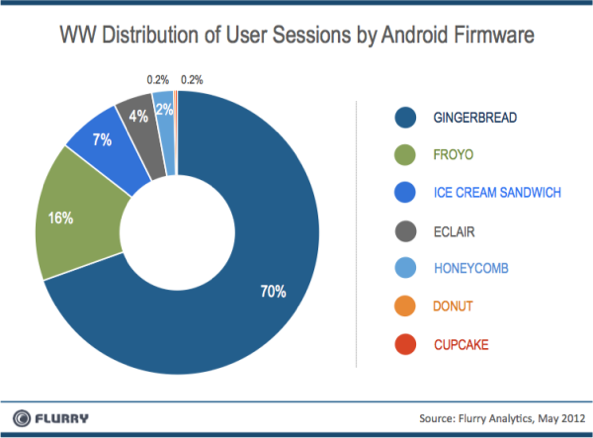 And this is a heatmap representing nearly 4,000 Android devices (via TechCrunch). 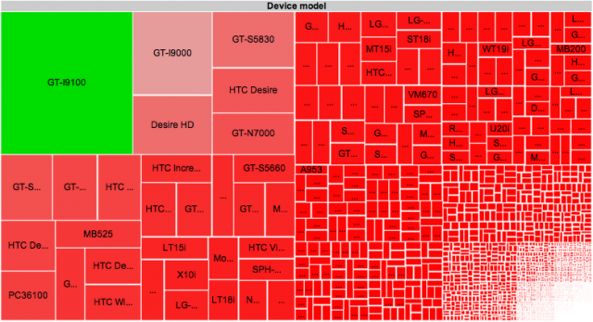 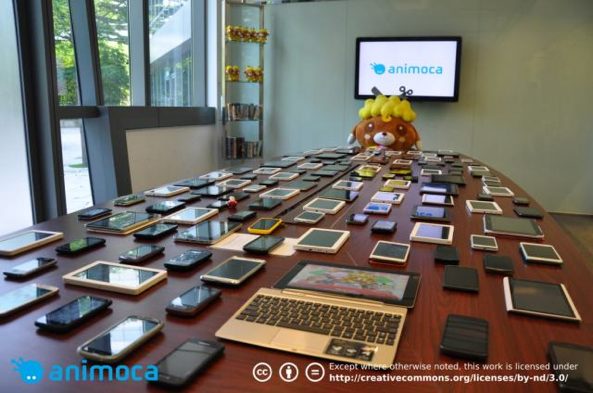 Developers typically have to test their work against at least 400 Android devices before pushing their apps out.

I think you can imagine the headaches and the sheer time-suck that Android fragmentation imposes on bedroom programmers or even mid-sized studios.

Contrast this to Apple’s ecosystem divided into two screen sizes (3.5 inch iPhones and iPod touches and 9.7-inch iPads), with two resolution presets each (Retina and non-Retina).

So we ran an interesting poll asking whether our readers get worked up over iPhone exclusives going Android.

Turns out the results were pretty evenly spread out between ‘Yes, top apps should be exclusive to iOS’, ‘No, competition is good’ and ‘I don’t care’.

Of course, we here at iDB are all for competition as each company forces the other to keep innovating or risk being left behind.

I’ll just leave it at this for now.