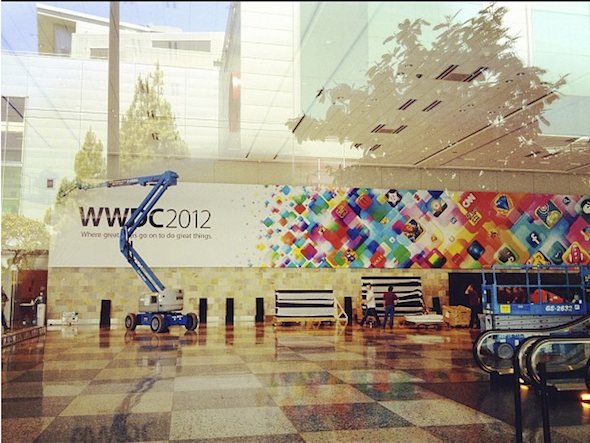 You’ve heard all of the rumors and speculation, but just in case you needed more proof that Apple’s highly anticipated WWDC event was on the horizon, here you go. As noted by 9to5Mac, Apple has started hanging WWDC banners at the Moscone Center.

Apple used its World Wide Developers Conference to unveil iOS 5 last year, but it has also been known to use the opportunity to show off new hardware. So what can we expect from this year’s event? Keep reading…

The tech world seems to agree that we will once again get a sneak preview of the latest version of iOS (iOS 6) during next week’s festivities. As we first reported, the update is expected to include a complete overhaul of all stock applications and an all-new Maps app. There has also been some rumblings of Facebook integration and other additional features.

Aside from iOS 6, the rumor mill has also suggested we could see a major software update for the Apple TV. And according to the speculation, headlining its list of new features could be the long-awaited App Store support, which would allow developers to design software specifically for the set-top box. But actual proof of this theory has yet to be seen.

And finally, although we aren’t expecting any new iOS hardware to turn up next week, Apple-insiders seem pretty convinced that we’ll be seeing all-new computers, including redesigned MacBooks, Airs, iMacs and more.

WWDC starts next Monday, June 11th, and runs through the 15th. As usual, we will be providing complete coverage of the event and all important announcements. So stay tuned.