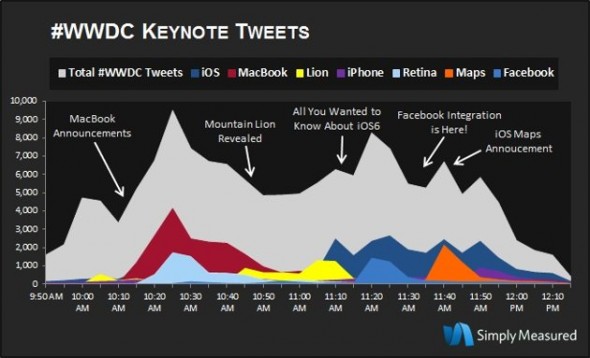 Forget the announcements regarding the new Retina display MacBook Pro, OSX Mountain Lion and other non-mobile related products. According to Twitter, iOS 6 was the hottest topic of Apple’s WWDC keynote.

Simply Measured, a social media research firm, analyzed more than 150,000 tweets on Monday with the #WWDC hashtag. And it found that out of all of Apple’s big announcements, iOS 6 was the most popular…

Tweets containing information regarding iOS 6 made up 18% of the above-mentioned Twitter talk, finishing just ahead of the new MacBook model at 15%. OSX Mountain Lion, Apple’s upcoming Mac update, accounted for 6% of the tweets. And bringing up the rear was iPhone-related chatter — folks disappointed that there was no mention of a new handset — at 5%.

In all, the results aren’t really too surprising considering the current state of the consumer electronics space. Aside from the ongoing talk that we’re in a post-PC revolution, more than 50% of Apple’s revenue comes from the sales of its iOS products.

Perhaps more interesting is the attention that Apple received during its keynote. WWDC-related tweets flooded Twitter during the media event, accounting for 8 of the service’s top 10 trending topics, and brought the site down on a number of occasions.

What other tech companies garner that type of response to announcements?