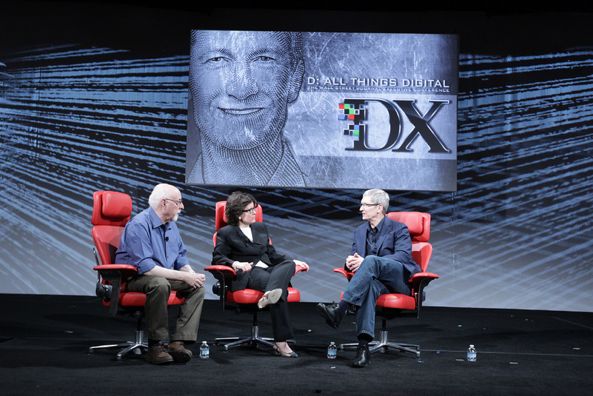 Tim Cook’s little opening-night chat with technology columnists Walt Mossberg and Kara Swisher at the D10: All Things Digital conference certainly made rounds, but also drew a critique from controversial Mike Daisey who slammed his colleagues for not being tough enough on Apple’s boss…

Here’s what Daisey wrote in a post over at his personal blog.

Kara and Walt – do you really think you asked hard questions tonight? Goodness, you got Cook to admit… that Ping was a failure! That’s amazing.

If only you had another hour, so you could get him to tell us who he liked best on Dawson’s Creek and what kind of ice cream is best: vanilla or cookies and cream. (Trick question: it’s always cookies and cream.)

He didn’t spare Kara Swisher either, who at one point asked Cook to comment on Apple’s “fictional” critics, which might be interpreted as an indirect criticism of Mike Daisey’s recent writing about the Foxconn topic.

First, Kara, this isn’t even good wordplay—I’m not a fictional f*****g critic. The word you would want is fictitious, though that wouldn’t really work either—you probably knew that, but I think then you got lazy and just said, what the f**k…who is really paying attention to that shit, anyway, right?

If he had been sitting in Mossberg’s chair, Diasey would have admittedly asked much tougher questions.

What kind of questions?

Well, how about this:

Recently you went to China for the first time as CEO to tour Foxconn’s production lines. Apple’s first outside audits of Foxconn happened in 2006, after media coverage back then, and the report recommendations made six years ago are the same as the ones made by the FLA in 2012. Did it not seem important enough a priority for the CEO go until now, six years later? Why did it take so long?

According to our poll from yesterday, nearly sixty percent of respondents liked Cook’s D10 responses a lot and nearly one in four think he could have done a better job answering the questions.

Personally, I think Cook did good, but he spoke too slow at times. I’d also cut down on marketing gibberish if I were Cook. Moreover, some of his responses sound like some nonsense that just came out of a politician’s mouth.

Daisey had the nerve to touch upon the Foxconn topic, pointing out that “The New York Times and others have pointed to the squeezing of that supply chain as a big part of the problems at Foxconn”.

That’s saying a lot coming from a guy who fabricated some of his stories alleging Apple’s been seriously mistreating workers who assemble its products in Chinese workshops.