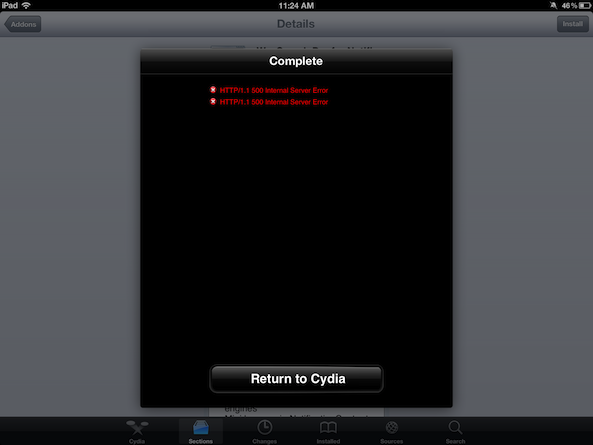 If you’re receiving a HTTP/1.1 500 Internal Server Error when trying to download packages in Cydia, don’t worry. Practically everyone is getting that error now because Cydia is so incredibly busy now.

It’s the whole “drinking from a fire hose” analogy. There’s just too much traffic to handle all of the request because of the recently released Absinthe 2.0 jailbreak for iOS 5.1.1…

The thing that makes this jailbreak more significant than any other before it, is that it’s compatible with so many devices from the get go. Along with that, the Chronic Dev Team did an outstanding job getting things in order from a logistical standpoint.

I don’t think we’ve ever seen a Mac and Windows simultaneous release like we did today. Not only that, but Absinthe 2.0 works with Linux out of the gate too!

Cydia will eventually smooth out, but you’re going to have to be patient. This is an unprecedented jailbreak release, and everyone wants in on the action.

What’s your experience been?