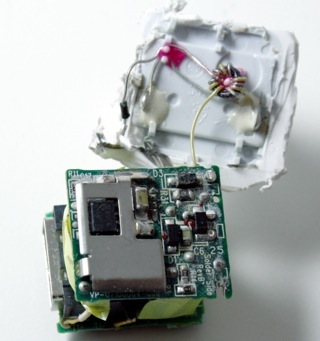 Did you ever wonder why Apple’s $29 USB Power Adapter for the iPhone costs so much more compared to, say, Samsung’s cube charger that goes for about $6-$10 (and looks all too familiar).

Alright, everything Apple is more expensive because the company makes integrated products that “just work”, right?

But as tough as it is to argue against Apple pricing its shiny gadgets accordingly, it’s far too easy to criticize Apple accessories that many people think cost more simply because of the official branding.

In the case of the original Apple USB Power Adapter, there is no merit to this argument for there’s more to your iPhone charger than meets the eye…

Blogger Ken Shirriff took it upon himself to tear down a $29 Apple charger in order to figure out just how complex the tiny thing is. In a nutshell, the little device “takes AC input (anything between 100 and 240 volts) and produce 5 watts of smooth 5 volt power, but the circuit to do this is surprisingly complex and innovative”.

The switching power supply turns the input power on and off around 70,000 times times a second in order to get the exact output voltage required. There are two tiny printed circuit boards inside, packed with surface mounted components on both sides.

The primary board takes care of high voltage while the secondary board handles the low voltage from the transformer and feeds it to the circuitry. A second feedback circuit also shuts down the charger for protection in case of overheating or if the output voltage is too high.

This is where things get interesting, Shirriff writes:

The USB output also has specific resistances connected to the data pins to indicate to the iPhone how much current the charger can supply, through a proprietary Apple protocol. An iPhone displays the message “Charging is not supported with this accessory” if the charger has the wrong resistances here.

The charger also packs in a Flextronics-patented resonant clamp circuit that absorbs voltage spikes on the transformer.

The device has a bunch of components ordinarily not found on other chargers. These work together toward reducing EMI interference with the iPhone’s touchscreen while enhancing the iTunes listening experience.

The transformer includes a shield winding to absorb EMI. The output circuit uses three capacitors including two relatively expensive tantalum ones and an inductor for filtering, when many supplies just use one capacitor. The Y capacitor is usually omitted from other designs. The resonant clamp circuit is highly innovative.

As for the controller circuitry, it runs on DC power provided by an auxiliary power circuit consisting of a separate auxiliary winding on the transformer, a diode and filter capacitors.

But how does the controller circuitry gets DC power before the main transformer starts generating power?

The solution is the high-voltage DC is dropped to a low level through startup power resistors to provide the initial power to the IC until the transformer starts up. The auxiliary winding is also used by the IC to sense transformer demagnitization, which indicates when to turn on the switching transistor.

This is what the secondary circuit board from the iPhone charger looks like.

Optocuplers are in the upper left and feedback circuitry is in the lower left. 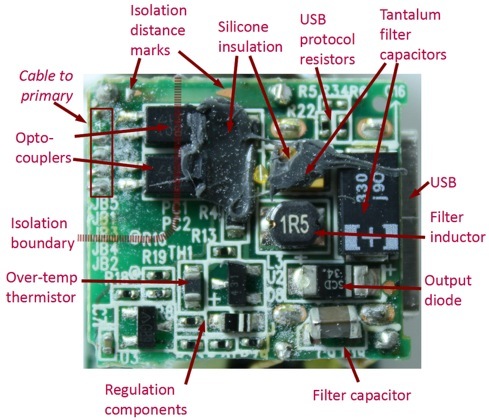 And perhaps unsurprisingly, all these components are crammed into impossibly tiny space, as you’d expect from Apple.

Looking at these pictures, it’s easy to lose track of how very small these components are, and how the charger crams all this complexity into one inch. The following slightly magnified picture shows a quarter, a grain of rice, and a mustard seed to give a size comparison. 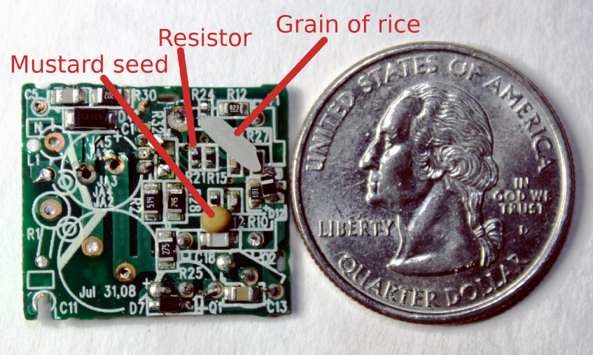 Even with cutting-edge tech that goes into this thing, Apple’s charger is “almost all profit”, Shirriff wrote:

I was surprised to realize how enormous Apple’s profit margins must be on these chargers. These chargers sell for about $30 (if not counterfeit), but that must be almost all profit.

He estimated that the Apple charger has “about a dollar’s worth of additional components” inside compared to Samsung’s charger, “but it sells for $20 more”.

Apple’s power adapter is clearly a high-quality power supply designed to produce carefully filtered power. Apple has obviously gone to extra effort to reduce EMI interference, probably to keep the charger from interfering with the touchscreen. When I opened the charger up, I expected to find a standard design, but I’ve compared the charger to the Samsung charger and several other high-quality industry designs, and Apple goes beyond these designs in several ways…

Apple’s design provides extra safety in a few ways… the super-strong AC prongs, and the complex over-temperature / over-voltage shutdown circuit. Apple’s isolation distance between primary and secondary appears to go beyond the regulations…

Apple’s iPhone charger crams a lot of technology into a small space. Apple went to extra effort to provide higher quality and safety than other name-brand chargers, but this quality comes at a high cost.

I think Shirriff’s findings are surprising, at least to me.

I know about Apple’s penchant for going the extra mile to create awesome gadgets, it’s just I wasn’t expecting so much care would go into designing a charger.