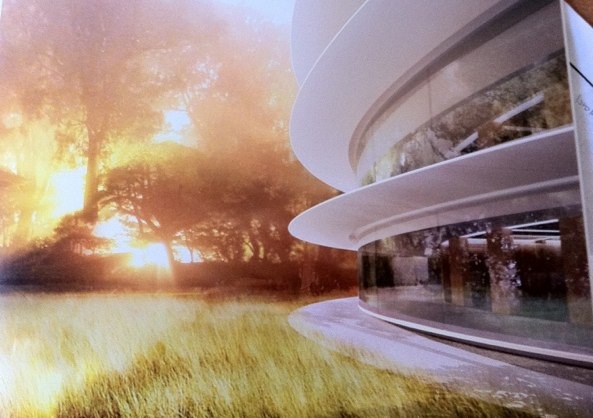 Instead, the spectacular all-glass structure will serve as research facility office space for an additional 13,000 employees and will provide an additional 300,000 feet of expansion space for future growth.

As you know, late CEO Steve Jobs originally presented the idea for the upcoming structure a day following WWDC 2011.

Seth Weintraub, who runs the 9to5Mac site and was my former boss, was able to get hold of the brochure from one of Apple’s new neighbors.

Apparently, the new facility is now being referred to as ‘Campus 2’.

Unfortunately, it won’t be open to the public.

Campus 2 will be dedicated to research while the current campus at 1 Infinite Loop will continue to be the company’s corporate headquarters, prompting Weintraub to speculate that “top executives will likely stay behind”.

Site plan also calls for a corporate fitness and recreation center in a separate structure and a solar panel-covered roof.

The brochure also reveals that the “world class” auditorium at Campus 2 will host product launches and corporate events, which is exciting news for those lucky members of the press who get invited to Apple’s media events.

Apple intends to break ground as soon as Cupertino approves the changes (scheduled for later this year) and still plans to start occupying the space in 2015. 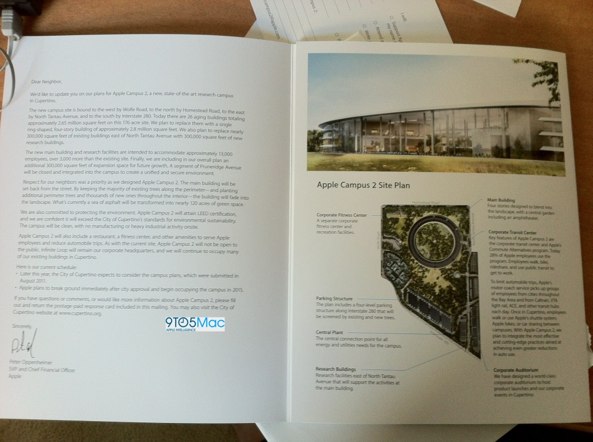 Apple’s letter to Cupertino neighbors is on the left page and signed by finance chief Peter Oppenheimer.

We’d like to update you on our plans for Apple Campus 2, a new, state-of-the-art research campus in Cupertino.

The new campus is bound to the west by Wolfe Road, to the north by Homestead Road, to the east by North Tantau Avenue, and to the south by Interstate 280. Today there are 26 aging buildings totaling approximately 2.65 million square feet on this 176-acre site. We plan to replace them with a single ring-shaped, four-story building of approximately 2.8 million square feet. We also plan to replace nearly 300,000 square feet of existing buildings east of North Tantau Avenue with 300,000 square feet of new research buildings.

The new main building and research facilities are intended to accommodate approximately 13,000 employees, over 3,000 more than the existing site. Finally, we are including in our overall plan an additional 300,000 square feet of expansion space for future growth. A segment of Pruneridge Avenue will be closed and integrated into the campus to create a unified and secure environment.

Respect for our neighbors was a priority as we designed Apple Campus 2. The main building will be set back from the street. By keeping the majority of existing trees along the perimeter – and planting additional perimeter trees and thousands of new ones throughout the interior – the building will fade into the landscape. What’s currently a sea of asphalt will be transformed into nearly 120 acres of green space.

We are also committed to protecting the environment. Apple Campus 2 will attain LEED certification, and we are confident it will exceed the City of Cupertino’s standards for environmental sustainability. The campus will be clean, with no manufacturing or heavy industrial activity onsite.

Apple Campus 2 will also include a restaurant, a fitness center, and other amenities to serve Apple employees and reduce automobile trips. As with the current site, Apple Campus 2 will not be open to the public. Infinite Loop will remain our corporate headquarters, and we will continue to occupy many of our existing buildings in Cupertino.

Here is our current schedule:

• Later this year, the City of Cupertino expects to consider the campus plans, which were submitted in August 2011.
• Apple plans to break ground immediately after city approval and begin occupying the campus in 2015.

If you have questions or comments, or would like more information about Apple Campus 2, please fill out and return the postage-paid response card included in this mailing. You may also visit the City of Cupertino website at www.cupertinog.org.

Here’s an excerpt from Jobs’ speech:

It’s a pretty amazing building. It’s a little like a spaceship landed. It’s got this gorgeous courtyard in the middle… It’s a circle. It’s curved all the way around. If you build things, this is not the cheapest way to build something.

There is not a straight piece of glass in this building. It’s all curved. We’ve used our experience making retail buildings all over the world now, and we know how to make the biggest pieces of glass in the world for architectural use.

And, we want to make the glass specifically for this building here. We can make it curve all the way around the building… It’s pretty cool.

And here’s that footage.

If Campus 2 won’t replace 1 Infinite Loop headquarters, I wonder what kind of research will potentially be conducted at the facility.

Perhaps Jony Ive and his design team will move to Campus 2?