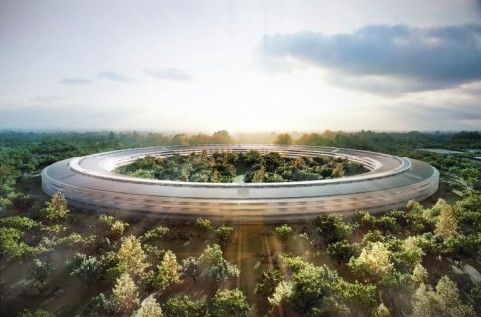 What do you do if you have $75 billion dollars in the bank, and your company is growing so fast that you can’t find a big enough area to house your operations?

That’s easy, you design and construct a seemingly stadium-sized building out of pure glass to send a message that your company is innovative and that money isn’t an object. And that’s exactly what Apple’s doing…

Steve Jobs and company seemed really excited when they announced plans for the new Cupertino campus earlier this year. In fact, Jobs himself was spotted at a city council meeting to ensure that the building would receive approval.

Although it’s not scheduled to open until 2015, the city of Cupertino just released a barrage of PDF’s containing blueprints and detailed drawings of Apple’s new spaceship-like workplace.

The 4-story building is going to be completely made out of glass — curved glass at that. Jobs says there won’t be one piece of straight glass in the whole place. The structure will be able to hold 12,000 employees, and contain a cafeteria that will seat 3,000 of them.

The plans also detail an underground parking lot with a solar panel-covered roof. On that note, Apple has stated that the entire building will be eco-friendly and the surrounding area will be filled with thousands of trees.

I must say, if the economy is in a slump, you wouldn’t know it by looking at Apple’s new campus. You almost wonder if they’re overdoing it a little. But I guess when you’re the most valuable company in the world, it doesn’t matter.

What do you think of Apple’s new campus?