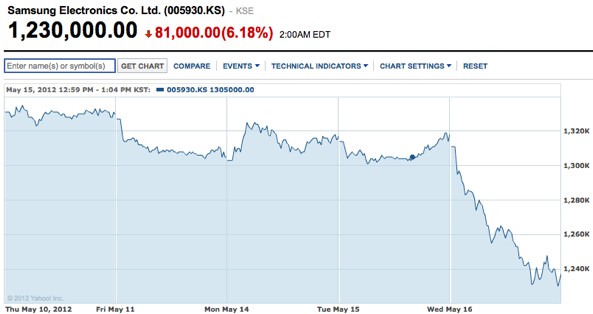 Apple is Samsung’s biggest client and Cupertino’s business contributes substantially to their fortunes so no wonder Samsung’s shares fell yesterday more than six percent to a nine-week low, effectively wiping out a cool $10 billion of the company’s market capitalization…

The news gathering organization seems to have high confidence in DigiTimes because they sourced the story from the Taiwanese trade publication’s report alleging that Apple is planning to source mobile DRAM chips from Elpida for upcoming iPads and iPhones.

The iPhone maker has reportedly booked half of the output of Elpida’s 12-inch plant in Hiroshima, Japan. Apple also buys memory chips from SK hynix, whose shares also dipped nine percent on the news, hitting a 20-week low, the biggest one-day drop for the company in nine months.

A quarter ago, the company’s share was pegged at just 53.5 percent and they were able to grow sales thanks to the Galaxy family of devices that contributed to about 30 percent of Samsung’s total DRAM output.

Together, Samsung and Apple represented nearly half of all smartphones sold globally during the first quarter of this year.

For Apple to switch from a world-class supplier to a company that recently filed for bankruptcy and has been in talks to sell its business to U.S.-based Micron Technology Corp is a bit awkward, to say the least.

According to a LIG Investment & Securities analyst:

It looks like Apple doesn’t want to see Samsung and hynix dominate the chip market. Apple wants to maintain its bargaining power by keeping Elpida running.

Yeah, but why such a huge drop in Samsung’s share price?

According to a Solomon Investment & Securities analyst:

A merged Micron-Elpida could pose a significant threat to South Korean memory chipmakers, and Elpida’s huge order from Apple was the spark that triggered these worries.

The Globe and Mail suggested a year ago that Apple was looking to end its relationship with Samsung by taking electronics parts orders elsewhere amid a growing legal dispute over the iPhone’s design and software features.

Orders from Apple are projected to grow this year to $11 billion worth of parts.

The Wall Street Journal reported this morning that production of four-inch displays for the next iPhone is commencing next month. The new screen is said to be made by Sharp, LG and Japan Display, a joint-venture between the Japanese government and Sony, Hitachi and Toshiba.

Samsung wasn’t mentioned in the article, which is interesting knowing they supply high-resolution display panels for the new iPad.

Even if it’s in fact seeking suppliers other than Samsung for mobile displays and DRAM chips, Apple remains dependent on Samsung’s manufacturing plan in Austin, Texas and its ability to churn out tens of millions of Ax-series processors for iPhones, iPads and iPods each quarter.

There has been some talk of Apple dropping Samsung for A6 production this year, but yield issues and manufacturing difficulties with the foundry’s 20-nanometer process allegedly pushed back those plans until 2014.

One way or another, Apple seems to be taking its business elsewhere.

Whether or not the move will backfire remains to be seen.