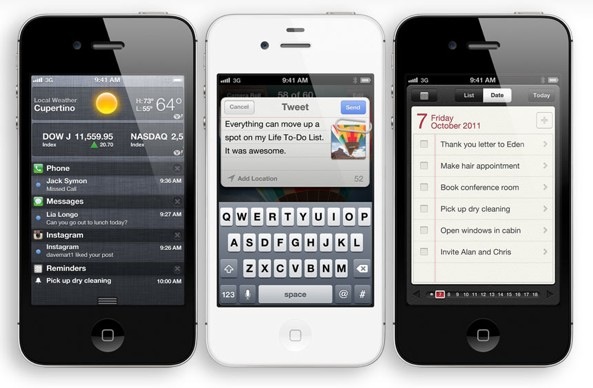 Research firm Gartner is out this morning with its first-quarter phone sales survey. The results show that Apple and Samsung together now represent 49.3 percent of all smartphones sold globally, up from 29.3 percent in the first quarter of 2011, while other vendors continue to experience a decline.

China has now become Apple’s second-largest market for smartphones, after the United States and rival Samsung pretty much leads all, having overtaken both Apple and Nokia in smartphone and cell phone shipments, respectively…

According to the study, the global market for mobile phones contracted by two percent year-over-year, with global shipments decreasing to 419.1 million units in the first quarter of 2012. Gartner noted this is the first time since the second quarter of 2009 that the market exhibited a decline.

iOS and Android continue to lead the pack, together powering more than three out of four devices that shipped during the quarter, for a combined 79 percent OS share.

Apple sold 33.1 million iPhones in Q1 2012 while the Android camp collectively shipped 81.1 million smartphones, out of which an estimated 38 million were made by Samsung.

The South Korea-based Galaxy maker is now both the top smartphone and cell phone vendor in the world, having overtaken both Nokia in cell phone shipments (86.6 million units vs. 83.2 million for Nokia,  a 22.7 percent decrease) and Apple in smartphone sales. 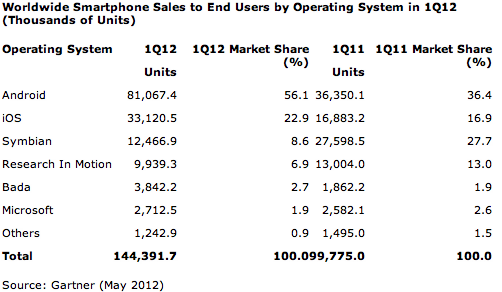 Samsung’s Android-powered smartphones in Q1 2012 represented more than 40 percent of all Android smartphone sales worldwide. Gartner noted that “no other vendors achieved more than a ten percent share of the market”.

The table below depicts worldwide cell phone sales in terms of units shipped. 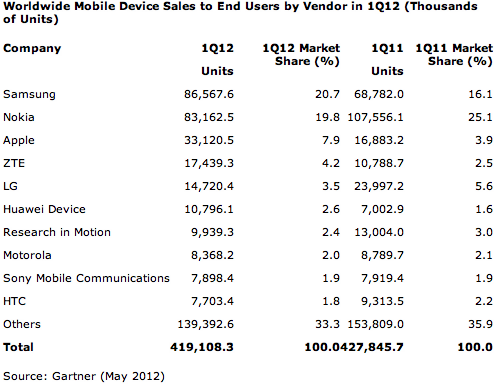 China has become Apple’s second-largest market for iPhones, after the United States. The company is rumored to be in negotiations with China Mobile, the world’s largest carrier, for iPhone partnership though people in the know think no deal will be reached until 2013.

Driven by the continued success of the iPhone 4S, Apple’s sales grew 96.2 percent in the first quarter of 2012 as the new model expanded into new markets and carriers. Sales in China were particularly strong this quarter. With more than 5 million units, China became the second-largest market for Apple after the U.S.

On top of the sales through official carriers’ channels, there was an increase in transshipments from Hong Kong where volume has been growing over the past few quarters to reach a sell-in of more than 3 million units.

They used to rule Android smartphone sales and now are going down the drain, with plummeting shipments contributing to quarterly losses.

And while Nokia is clinging on the #2 slot now, they’re continuing on a downward spiral.

Research In Motion is also in a sharp decline: they sold 3+ million phone units more in the year-ago quarter than in Q1 2012.

When you think of it, excluding Samsung, Apple, Huawei and ZTE, everyone else’s shipments declined year-over-year.

No wonder Samsung and Apple are the only ones making profit while others collect lose change.

Oh, and let’s not forget about the Others who sold nearly 140 million cell phones in Q1 2012, which tells us there’s a huge market for non-branded devices and dirt cheap devices manufactured by knock-off vendors in Shenzen.

Summing up, I think it’s a pretty big deal that Apple now ranks as #3 in terms of worldwide cell phone sales.

Remember, they entered the market only five years ago and only compete in smartphones.