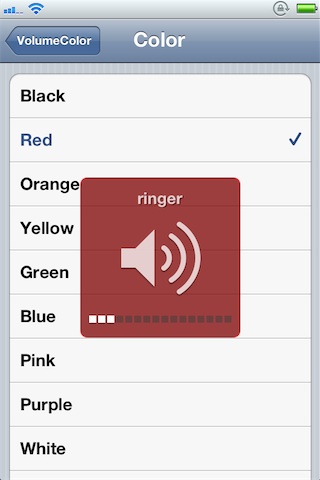 You can safely file this one under the “not necessarily useful, but nonetheless interesting” tweak of the day. VolumeColor is a recent Cydia release that allows you to alter the color of your volume HUD.

It’s also not that original, as I’m pretty sure I’ve seen such functionality in another tweak before, though its name currently escapes me.

Anyhow, feel free to take a look at our video walkthrough of VolumeColor inside…

When I initially reviewed VolumeColor, it had two basic settings: a kill switch, and a list of a little under a dozen colors to choose from. It also has an issue where it would not properly display the pink color.

That pink color issue seems to have been resolved with the latest version of VolumeColor, and the developer has added a few more options to the package for good measure.

There are now options to both enable a random color, and adjust the opacity of the volume HUD as well.

VolumeColor is anything but a groundbreaking tweak, but it’s nice to be able to customize your iPhone’s look in this manner. If you’re interested, it can be had for free on Cydia’s BigBoss repo.

Let me know what you think about VolumeColor in the comments below.