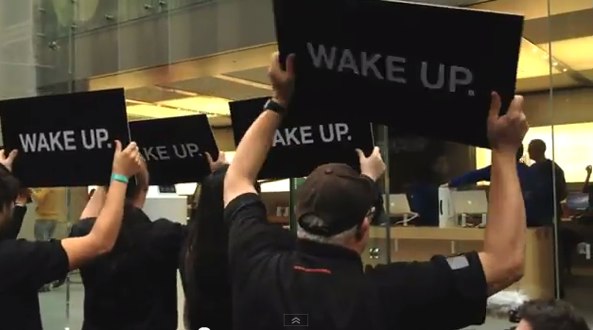 Risking to be called out as a fanboy, I just can’t help noticing the new lows Research In Motion sank to. The staged ‘Wake Up’ protest?

Well, that silly campaign has now culminated with more of the same, as if this whole anti-Apple nonsense was going to do the company’s declining BlackBerry biz any good.

Canada-based RIM, which recently unveiled its new BlackBerry 10 OS, set up a new website that invites business people to “wake up and be bold”.

But the embattled BlackBerry maker, once a mighty smartphone brand, couldn’t refrain from taking potshots at Apple, saying in the crawl on the website that “you don’t just think different, you do different”.

It’s no surprise that indirect Apple bashing is now official strategy at RIM. What surprises me is that nobody on the executive team realized it wouldn’t work.

RIM’s clueless, man. They’re done for, but just don’t know it yet…

Now before you go looking for your suite and briefcase, we’re not talking about that kind of business.

Business is no longer just a suit-wearing, cubicle-sitting, card-carrying kind of pursuit.

These days being ‘in business’ you’re the kind of person who takes action and makes things happen.

You don’t just think different… You do different.

You’re either here to leave your mark and eat opportunity for breakfast or you’re satisfied to just float through life like a cork in the stream.

That voice that reads the crawl aloud sounds a lot like CNN’s Richard Quest, no?

By the way, the part about leaving your mark sounds all too familiar.

Now, we know some people will choose to float on by and that’s fine.

Being in business is not for everyone, but unfortunately… there is no middle ground. You’re either in business or you’re not.

For those of us with our eyes wides open, we need to realize there’s only one device for people who mean business..

The brand that’s been in business from the very beginning.

Wake Up, Be Bold – Blackberry

Note to RIM: mission statements are fine, Apple did a few themselves (here and here). But now’s not the time to play hero and be dismissive of the realities. It’s this very cocky attitude that eventually cost you your hard-earned reputation.

Listen, don’t get me wrong.

Like any other company, the beleaguered RIM is entitled to resort to negative advertising in promoting its products.

I also do not think RIM shouldn’t poke fun of rivals or even ridicule them, if need be.

But I too am entitled to my own opinion and I just don’t think RIM’s doing itself any favor by attempting to negatively paint Apple in official advertising.

I obviously am not alone.

Some call it the most boring campaign they have ever seen, others sarcastically point out it won’t help turn RIM right around and then there are those not being this polite at all.

If I were a CEO of a once great smartphone maker spiraling down to a single-digit market share in the U.S., I’d definitely demand that my marketing people conceive a communications strategy entirely around new product features and our core strengths.

The way I read RIM’s message now is that the iPhone scares them to death.

Not that they shouldn’t be scared, mind you.

But it just doesn’t make sense from marketing standpoint to ever mention Apple because it just reinforces the notion floating out there that BlackBerry already lost out to iPhone in enterprise.

So, what did you think of the ‘Wake Up, Be Bold’ website?

Was it too much for your comfort level?