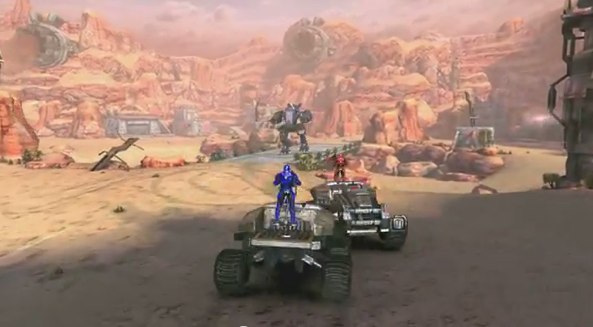 The acclaimed N.O.V.A. – Near Orbit Vanguard Alliance sci-fi series has got to be one of the best-looking first-person shooters for iOS devices money can buy.

Just as we’re holding our breath for a third installment in this sci-fi series, French developer Gameloft is out with a new trailer revealing some pretty doggone ideas and jaw-dropping 3D graphics…

As the folks at Nvidia keep on hinting that mobile graphics will be competing with consoles in the not-too-distant future, the revolution is already happening on the iOS platform.

Take, for example, the upcoming Infinity Blade Dungeons, a medieval game designed to show off graphical prowess of the new iPad.

It features quite amazing graphics that would have just a year ago been unheard-of on smartphones or tablets.

I love how Halo-esque the game looks!

The trailer doesn’t reveal much in a way of features, save for the ability to team up with friends to drive vehicles and a bunch of enhancements, such as six huge maps, ten different weapons and a wealth of character customization options at your disposal.

Having played both the original N.O.V.A. FPS and its sequel, I’m definitely looking forward to the third installment and some dazzling sci-fi carnage on my iPhone.

Stay tuned as we review N.O.V.A. 3 following its release on the iPhone and iPad later this month.

Have you played N.O.V.A. games yet on your iOS device?