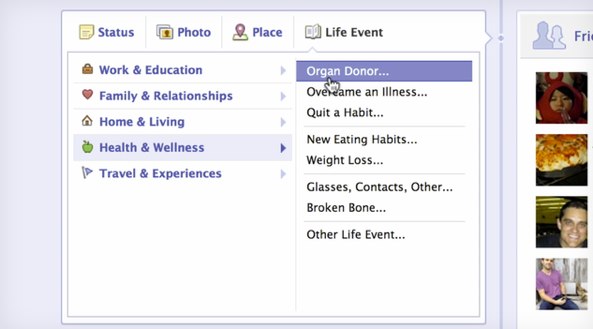 The internet went abuzz yesterday as Facebook’s Zuckerberg dropped hints of a new feature said to “save lives”.

It’s basically a way of letting anyone identify their organ donor status on their Facebook Timeline. The move should help over 114,000 people waiting for transplants in the United States alone.

Zuck also said it was inspired by late Apple co-founder Steve Jobs, who underwent a liver transplant in 2009 and later that year publicly urged WWDC attendees to become organ donors…

As you know, Jobs said in an emotional keynote opening that he was “alive” and “vertical” thanks to a liver transplant he received from a person who had died in a car accident.

“Without such generosity I wouldn’t be here today”, Jobs said.

Facebook noted in a news release how its site is being used by millions of people around the world for good causes, underscoring the important role the social network played in the 2011 earthquake and tsunami which rocked Japan.

As for the new feature, the company said:

Medical experts believe that broader awareness about organ donation could go a long way toward solving this crisis. And we believe that by simply telling people that you’re an organ donor, the power of sharing and connection can play an important role.

The tool works in both the United States and United Kingdom, though Facebook is looking to roll it out in additional territories.

The U.K. National Health Service Blood and Transplant (NHSBT) department also participates in the project. As users post Timeline life events announcing their organ donor status, there will be a link to the signup form on the NHSBT website.

And just this morning, Zuck told Good Morning America that this feature has been inspired by both “friend” Steve Jobs and his girlfriend Priscilla Chan who’s in medical school.

He said he never talked with Jobs specifically about the tool, but confirmed many of the people involved in the project were inspired after Jobs’ death.

In case the clip won’t play for you, here’s a quote:

That definitely, I think, was something that we all had in mind as we were building this out… His story is just one of many, of people who both were able to have an organ transplant that made his life longer and he was extremely thankful for that.

Facebook is also linking to the official donor registry for users who aren’t already registered with their state or national registry and want to be.

I think it’s a positive step in the right direction. Granted, the organ donor identification on your Timeline won’t save lives directly compared to registering yourself as an organ donor with the official donor registry.

What it does is raise awareness and tread new ground.

Hopefully, other social networks will take a look at what Facebook is doing and develop new ideas to tap crowd-sourcing powers to help save lives.

That’s the power of friends to you.