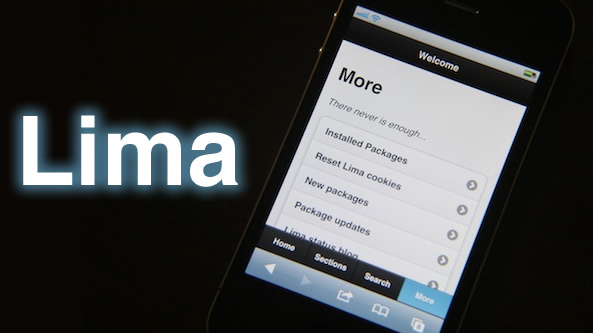 Over the years there has been no shortage of proclaimed Cydia replacements, alternatives, and supplements.

Lima is the latest such purported alternative, but it has one unique thing going for it that makes it a bit different from the others — it’s entirely browser based.

Is Lima a legitimate threat to Cydia’s dominance?

I’ve had the privilege to go hands-on with a beta copy, and I’d like to share some of the things that I found with you.

Since I’m testing a beta copy, the setup process is likely a bit more cumbersome that it will be once it officially launches.

As it stands, setting up the Lima beta involves the following.

It’s a lot of steps, but again, this is apparently just for the beta authorization. I’ve been provided with 4 additional beta invites that we will be giving away in the near future.

Once you’re installed and authorized to use Lima, it’s pretty straightforward from there.

Opening Lima in Safari yields a home page that provides you with some details about Lima such as My Lima, which is still in the works, and a Network status link to check the availability of the servers, databases, etc.

I like the fact that Lima provides such transparency for its end users. I think this is something Cydia could use when its default repos are down for maintenance.

Also included on the home page is a link dedicated to package developers, an email shortcut to report problems, and the obligatory terms of service and credit links.

Along the bottom of the page are four main tabs, Home, Sections, Search, and More. Since we’ve already divulged the details of home page, let’s focus on the latter three tabs.

This is very similar to the Sections tab found in Cydia. In fact, it’s almost exactly the same. Here you can navigate to specific types of packages like Ringtones, Tweaks, Themes, etc. Unfortunately, unlike Cydia, there’s no method for disabling certain sections. This causes one to be inundated with packages that you may not have any interest in. Hopefully the developers of Lima will make that an option in a future update.

Search, like Sections before it, performs similar to Cydia, yet it’s not quite as functional. For one, there’s no predictive search like you find in Cydia. Oddly enough, though, I was able to yield more accurate search results with Lima when compared to Cydia.

For example, when I submit a search for SBSettings, voila! SBSettings is the first package that is displayed at the top of the search results. When I do the same thing in Cydia, I’m presented with a theme for SBSettings as the top result instead.

This problem is rarely an issue with Cydia due to the nature of the predictive searching capabilities, but nonetheless it is worth noting.

The More tab is likely where you will be spending the most time with Lima. The following sections are included in the more tab: Installed Packages, Reset Lima cookies, New packages, Package updates, and Lima status blog. Let’s examine each of these one by one.

Installed Packages: Here is where you find a full listing of all of your installed packages. Lima finds all of the packages you have installed via Cydia as well, so it’s an unabridged look at what’s on your device.

Unlike Cydia, there is no User view available in Lima, so you’re subjected to the full listing of every single package whether you understand what it does or not. For novice users, this can be a bit overwhelming and confusing.

Tapping on a specific package yields verbose details about said package, including More Info, Section, Size, and Source. This view is organized in a very basic manner and is completely devoid of advertisements. That’s a fact one can appreciate after being subjected to the uber-annoying ads thats seem to litter Cydia’s repos.

The reason why that’s possible is because Lima doesn’t incorporate the More Info page from the specific repo within the body of the package details. Instead, tapping the More Info link within Lima will open up a new browser window where you can glean additional information (screenshots, detailed notes, etc) about the app or tweak in question. Here is where you are generally subjected to advertisements.

New packages: This is the equivalent of the Changes tab in Cydia, except it doesn’t list any Available Upgrades you may have waiting. I also noticed that only seven package seem to be available for view under this section. Apparently, if you want the full monty you’ll have to use the Search tab and know specifically what you’re looking for. In my opinion this is one of the biggest downsides thus far when comparing Lima to Cydia; there’s no true way to get a good scope of what’s newly available.

Package updates: Unlike Cydia, Lima contains a section specifically dedicated to package updates. Oddly enough, the updates listed in Cydia differed from what was available in Lima. I’m not exactly sure why that is, but that’s what I found. One example was with Erica Utilities. In Cydia, no update was available, and I was still on beta17. In Lima, on the other hand, it showed an update available to version 0.4.2.

In addition to the issue with Erica Utilities, Cydia was reporting that I had a package update for AssistantServer Installer, which I know for a fact to be legit. With Lima, the package itself, let alone any updates, was nowhere to be found. That’s because one of Cydia’s default repos — the ZodTTD & MacCiti repo — is not a part of Lima at this time.

The only repos currently included with Lima are as follows:

These types of inconsistencies are some of the things you’re bound to encounter while using Lima. If Cydia reports that a particular package is the latest version, I will trust it well before I trust a newcomer like Lima.

Lima status blog A simple status message that tells you whether or not all systems are online.

My experience with Lima in this regard has been a mixed bag of good and bad. When it works, it works great — just as expected. When you’ve located a package you want to install, simply tap install in the upper right-hand corner and the package installs. Simple, right?

The Lima developers have placed a lot of effort into managing the package dependency chains and conflicts, and it works well to a large extent, but they admit that there still might be a few bugs in the system. I experienced a few of these bugs when Lima reports that I have a package conflict, when I indeed do not. I was able to install the same package via Cydia with no qualms.

Sometimes Lima isn’t so clear when it comes to requirements and dependencies. For instance, when I opened the iPad only Quasar tweak, I wasn’t told that I couldn’t install it. Instead, an install button was simply omitted altogether.

And paid tweaks seem not to be supported at all at this point. When I tried to install Call Recorder for Skype I was told that “not all packages could be located”. In some cases, like outright unsupported tweaks, install buttons just failed to appear at all.

The bottom line is that Lima still has a long way to go when it comes to the very basics of package management. It’s still beta, so you can’t judge the whole project off of these issues, but if there is one thing that the team should focus primarily on, it has to be basic package management.

The fact that Lima even exists is a huge testament to the dedication and time put into this creation. It’s been nearly a year since we initially heard about Lima, and I was sure it was destined for vaporware status.

Obviously I shouldn’t have doubted the team behind Lima. This is a real product, and it really works. That in itself is worth significant commendation.

I also love how minimal the interface looks, it’s very inconspicuous. Let’s face it, Cydia can look quite messy sometimes with the various headings, sections, and terrible advertisements. Compared to Cydia, Lima is like a breath of fresh air in that area.

A work in progress

Despite how much I adore the interface, there simply is no comparison at this point with regard to simple functionality. Cydia has been around a long time, and should be superior to Lima in virtually every usability facet — and it is.

With Lima, there’s currently no way to add 3rd party repositories. There’s no predictive search capabilities, resulting in the need to be exact with your searches. The interface can be slow and jerky, and the package management and discovery elements are at best mildly adequate.

Even with these shortcomings, Lima is an absolute amazing accomplishment thus far, and we have to remember that it’s still in beta.

It’s obvious that a ton of work has been put into the development of Lima, and the team has an excellent skeleton that just needs to be fleshed out a bit. Subtle things like missing UI elements (no back buttons on certain pages), various crashes, and missing installation logs, make it feel just like the beta that it currently is.

If they can work on the fundamentals — primarily revolving around basic package management — then everything else is bound to fall into place. One of the reasons that Cydia has been so popular is due to its ease of use. It’s incredibly easy to install and uninstall packages. Cydia even features different user levels so more novice users will only see items that pertain to them. If Lima can simplify the user experience, then it has major potential.

I understand that the developers of Lima are looking at it as an “experiment” but it can be much more than that with some needed polish. Hopefully the folks behind Lima will stay motivated to finish their project.

If you want to be able to try Lima for yourself, stay tuned. We’ll be giving away a few beta invites to a few of our readers in the near future.

What do you think about Lima? Would you consider using it based on the info we’ve provided you with? Do you welcome another competitor to Cydia?

Let us know your thoughts on Lima in the comment section below.