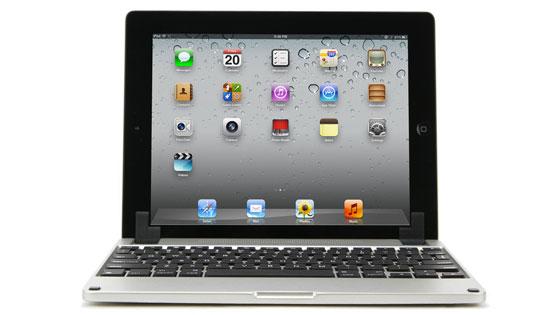 If there’s one thing that the iPad accessory space isn’t short on, it’s keyboard cases. There are a number of them available from several top-notch manufacturers including Zagg, Logitech, and Kensington. But that doesn’t mean there isn’t room for one more.

Meet the Brydge, an aluminum bluetooth keyboard case for your second generation or third generation iPad. Made from the “highest quality materials,” the accessory makes your tablet look (and function) an awful lot like a MacBook Air…

We saw a similar product surface earlier this month, but what sets the Brydge apart is its patent-pending hinge. This allows you to position your iPad at nearly any angle while you work. The case even comes with optional built-in stereo speakers.

The Brydge isn’t available yet. Its creators are currently running a Kickstarter project to try and raise $90,000 to bring it to market. If you’re interested, a pledge of $150 will get you one of the first units off of the assembly line (without speakers).

What do you think of the Brydge? It’s a bit pricey.