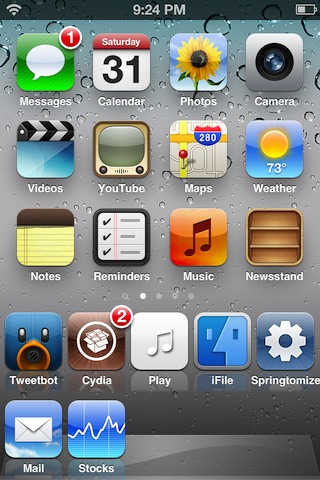 DoubleDock is a jailbreak tweak that does pretty much exactly what its name states — adds a second layer to your existing dock to create a “double” dock.

The problem with this tweak is that it isn’t very useful, it’s not very practical, it’s unattractive, and on top of all of that you have to pay for it…

I honestly don’t see any redeeming factors to this tweak on any level. Let’s start with aesthetics, shall we? DoubleDock forces you to have five app icons per row before it will allow you to even use the second dock layer. Because of this oversight, the tweak makes the iPhone’s interface look cluttered an unbalanced.

If that wasn’t enough, DoubleDock doesn’t hide the top dock’s app icon shadows, which means you have shadows sitting in the middle of thin air.

DoubleDock is devoid of any settings, so what you see is what you get. There is no customization involved whatsoever.

If you’re interested in trying DoubleDock, you can find it for $0.99 on Cydia’s BigBoss repo; though, I wouldn’t suggest paying anything for such a tweak. If you really need more app icons in your dock, try something like InfiniDock or Springtomize 2 instead. Either of those tweaks look and function much better than DoubleDock.