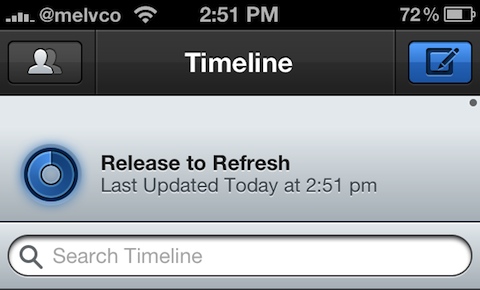 Users have been calling for Apple to implement the popular ‘pull-to-refresh’ feature into Mail and other native iOS apps for quite some time now. The function, which is found in Tweetbot and several other third-party applications, allows you to refresh the on-screen information by pulling down on the app’s UI.

But judging by this report from designer Dustin Curtis, we won’t be seeing the easy refresh option integrated into native iOS apps anytime soon. Why? Well apparently Twitter owns the patent to it…

Curtis points out that the pull-to-refresh function is covered in a patent entitled “User Interface Mechanics,” which lists former Tweetie developer Loren Brichter as an inventor. And since Twitter purchased Tweetie two years ago, ipso facto, Twitter owns the patent.

Here’s the part of the filing that really matters:

Perhaps nobody understands the dangers of using the patents and intellectual property of others without permission better than Apple, so we wouldn’t be surprised if this is what has been holding the company back from using pull-to-refresh in their own products.

But here’s hoping that Apple figures out some way to license the invention, because it would really improve the user experience of native iOS apps like Mail and Safari (without having to jailbreak). Heck even the Stocks app would benefit from it.

What do you think? Would you like to see pull-to-refresh in native iOS apps?