The folks at Tapbots have done it again. Tweetbot is a new Twitter client for the iPhone that’s made quite a splash. Not many apps can be described as “joyful UI design” or “an excellent innovator of the Twitter platform.” Some would say the app even “feels like a privilege” to use.

Tweetbot may very well be the app that gives the official Twitter client a run for its money. Let’s take a look…

Innovation has always been difficult for third party Twitter apps. Ever since Twitter purchased Tweetie and created the official Twitter app, most third party clients were sent back to square one. Clients like Twitterrific have managed to compete with Twitter’s official app, but most can’t deliver an appealing enough package to tempt users away from the familiar.

Tweetbot isn’t the Tapbots team’s first rodeo. They’ve already made very successful apps like Pastebot (one of my favorites), Calcbot (the best Calculator replacement on the iPhone), Convertbot, and Weightbot. Mark Jardine and Paul Haddad know how to make sexy software. Tweetbot spent many months in secret beta testing, and version 1.0 is a rock solid release.

Tweetbot has the perfect blend of the familiar and brand new. The app has loads of personality. It retains basic elements of what you expect from a typical Twitter app, and then it adds its own flare to set itself apart. 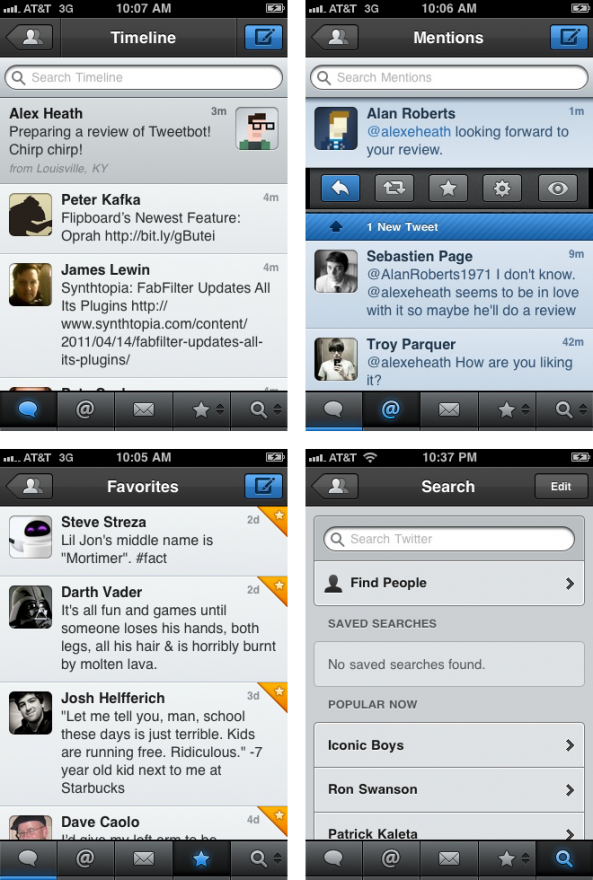 If you’ve used other apps from Tapbots, you’ll recognize the robot feel and industrial style of Tweetbot. Overall, the app uses mechanic animations and squared designs to convey the Tapbots charm. After using Tweetbot, you should notice an even starker contrast with the organic design of the official Twitter client.

The Timeline view in Tweetbot is what you would expect, but Tapbots has done something interesting with the ability to make a Twitter list your main Timeline. Tapping the word “Timeline” will bring up a settings panel to switch your Timeline view to any list associated with your Twitter account.

The second major difference in Tweetbot is the action drawer. When you tap on a tweet, you are greeted with a drop-down panel and a list of options, such as, Reply, Retweet, Favorite, Detail View, etc. The official Twitter client uses a left-to-right swipe for the same type of option panel, so it’s interesting to see Tapbots trying something different. 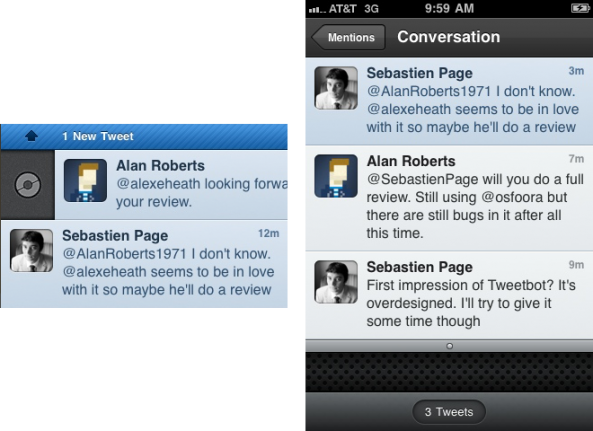 The implementation of swipe gestures in the timeline allows for two very appealing enhancements. Swiping from left to right reveals Conversation view, which is a great and easy way to see the history of a conversation. Right-to-left reveals a new feature from Tapbots called Related. This window uses a special algorithm to show related tweets. After testing Related out, you’ll notice that its results are really hit or miss. 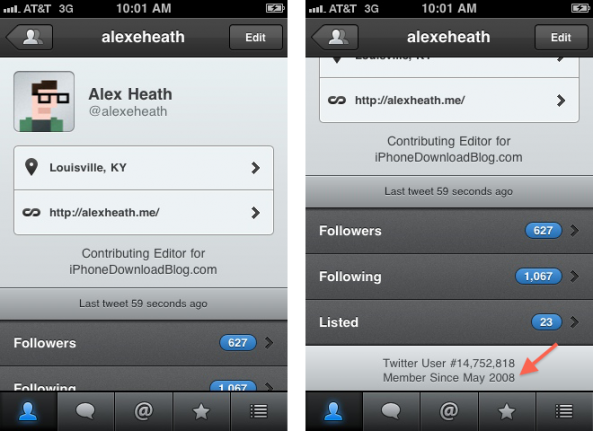 The profile view in Tweetbot is nice. It’s got all of the options and features you would expect, with some great attention to detail. I like how you can see when you joined Twitter and your Twitter user number.

The “Pull to Refresh” design in Tweetbot is a nice take on the existing interface in the official Twitter client. It makes loading new tweets fun.

Everything in Tweetbot looks and feels pretty, and the sound design is just as delightful. Like all Tapbots creations, Tweetbot is filled with different sound clicks and chirps for actions and notifications. The sounds that Tweetbot plays for different notifications and commands make the app feel more responsive and charming. You can tweak the sounds to your liking in Tweetbot’s Settings. 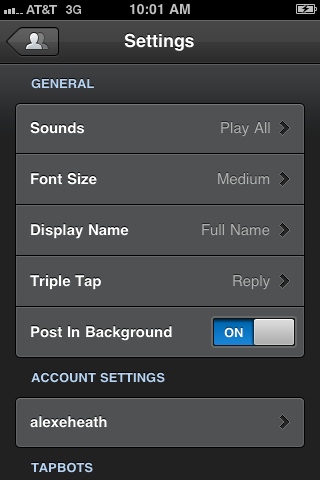 Tweetbot has plenty of stuff to look at in Settings. As was previously mentioned, you can tweak the app’s sounds. You can also change things like display font size and set options for triple tap (mine is set to trigger a reply window).

The Post in Background feature in Tweetbot is really nice if you want the app to upload your tweets in the background. If you tweet with photos or video, it could take a while to actually upload your tweet to Twitter (depending on your connection). Post in Background will publish your tweet in the background and give you a nice notification inside your Timeline upon completion. If Tweetbot can’t publish the tweet for some reason, it will automatically save it your list of drafts. 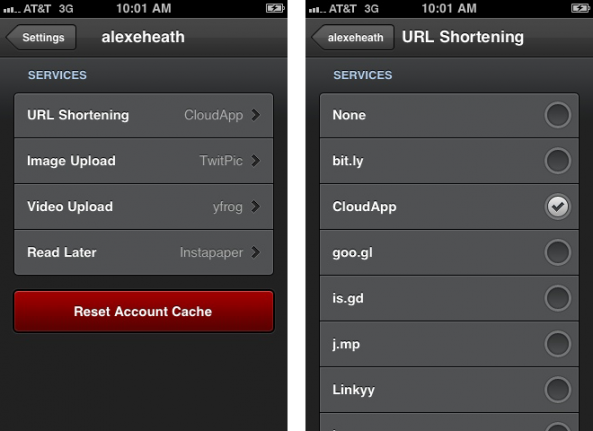 The Services panel in Tweetbot has a host of options for image uploading, URL shortening, etc. My favorite aspect of this area is the ability to use CloudApp.

Back in the Timeline, you’ll notice that there are 5 different items by default for Timeline, Mentions, DMs, Favorites and Search. You can actually edit the last two icons and change them to List view and Retweets. Tapbots does something clever here by allowing you access to 4 icons with two tabs. 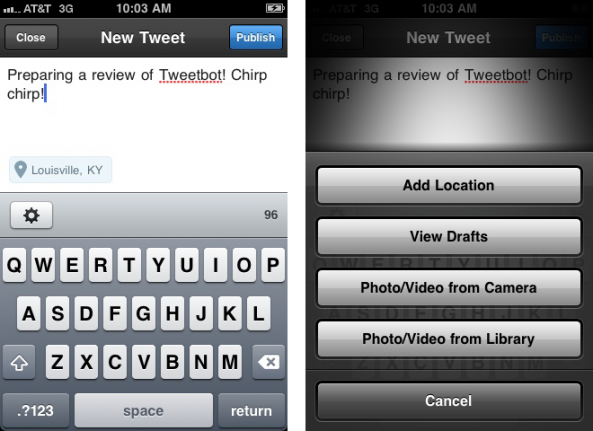 The Compose window is cleverly designed, and the location features are particularly well done. You have all of the expected options to upload media from your camera roll, take a picture in-app, or view your drafts.

Here’s what some of the options are like for interacting with tweets in the Timeline: 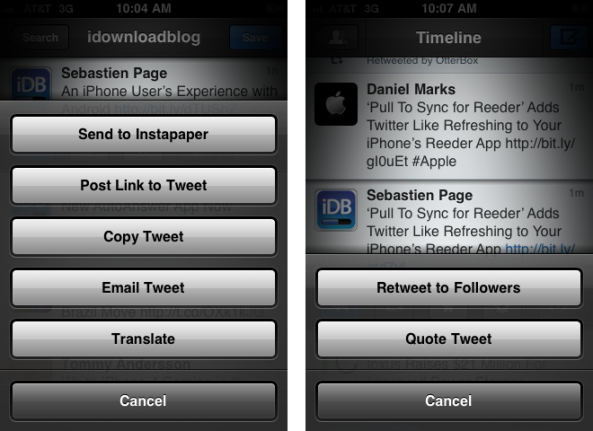 The ability to translate tweets is particularly nice if you follow certain accounts that tweet in another language. The translation tool itself works very well and hasn’t produced a bad result on me once.

There’s one last feature in Tweetbot that stands out. If you don’t check Twitter for a few hours, hundreds and hundreds of tweets can fill your Timeline. The older tweets usually don’t show up because they exceed Twitter’s API limit (For me, on an average day, tweets get lost if they’re published more than 40 minutes from when I last checked.) Since I like to read all of the tweets in my Timeline, I usually end up going to the Twitter desktop app or website to see the tweets I missed on the iPhone. 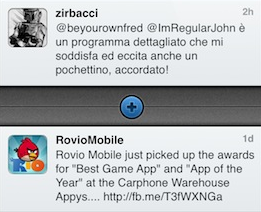 Tweetbot allows you to see the tweets that get lost in the API time limit gap. Instead of bringing you to the bottom of the Timeline without the option to load any farther, Tweetbot presents you with a visual gap in the Timeline that can be filled by tapping the blue “+” icon. That feature alone is absolutely brilliant.

Because of that ability in Tweetbot, I can now catch up on the older tweets that I’ve missed throughout the day. Tweetbot has made my Twitter experience on the iPhone much more efficient. 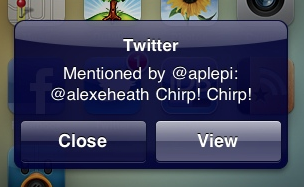 Although Tweetbot is about as good as it gets, it’s still not perfect. The biggest lacking feature for Tweetbot is native push notifications. Tweetbot can work with Boxcar in a roundabout way to provide a push service, but an app of this caliber should have its own push backend. Landscape view also needs to be added to put the finishing touch on this almost perfect app.

Tapbots is aware of these issues, and they’re hard at work to make Tweetbot even better in the next major update,

“Before you instantly dismiss Tweetbot from having every single feature on the planet, keep in mind that this is version 1.0. We have a big list of features that just didn’t make the first release. Some take longer than others or are just not as important. The bottom line is, we had to ship at some point. We felt Tweetbot in its current state made a good 1.0 and we decided to ship now instead of 2-3 months later. So please be patient with us as we continue to make Tweetbot a better client. Landscape support for composing, viewing images, websites, and videos is coming. We are also looking into our options for native push notifications. We’ve got a big list.”

It’s encouraging to hear that Tweetbot will continue to be improved.

Tweetbot is one of the best Twitter apps that the App Store has to offer, and it’s been out for less than a week! The design is gorgeous, the features impressive, and the user experience is pleasant. Tapbots has a hit on their hands.

It will be interesting to see how Tweetbot disrupts the third party Twitter client market. I know a lot of people are still stuck on older clients like Echofon, and there are still some good competitors out there like Twitterrific and TweetDeck.

I can’t recommend Tweetbot highly enough to anyone that uses Twitter and has an iPhone. It’s sexy. It’s new. It’s Tweetbot. And it’s available for $1.99 in the App Store.

What do you think of Tweetbot? Has it convinced you to stop using the official Twitter client? What’s your Twitter app of choice?