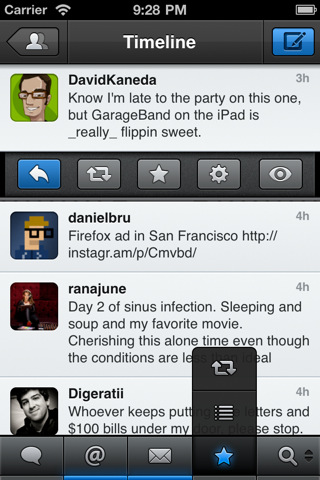 Tapbots, the developer behind popular clipboard manager Pastebot, Calcbot, and Convertbot has just released another signature app to the App Store: Tweetbot.

Tapbots has been known as one of the most innovative, user experience-oriented iPhone app developers, and their latest app, Tweetbot doesn’t seem to disappoint.

Whether it’s the meticulously-crafted interface, sounds & animation, or features like multiple timelines & smart gestures, there’s a lot to love about Tweetbot.

Several early reviews from well-known media outlets peg the device as the best Twitter client on the App Store.

Expect our full review on the app within the next couple of days! If you’ve already purchased the app, feel free to leave your thoughts in the comments!