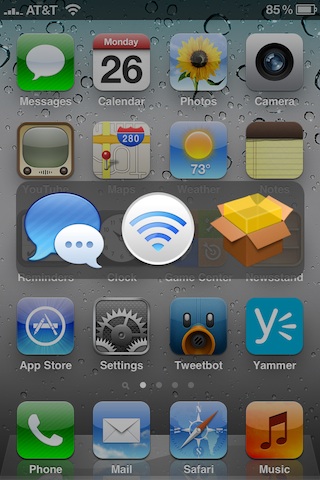 Command+Tab is one of the most useful keyboard shortcuts known to Mac users. It allows you to quickly switch between applications using nothing more than a couple of keys on the keyboard.

CmdTab for the iPhone is a jailbreak tweak that is loosely based on what Mac users have been enjoying forever.

I say loosely based, because it doesn’t actually allow you to select your running apps like on the Mac; instead, the developer decided to include a few predefined shortcuts that are accessible via an Activator action.

How does it perform? Take a look inside for the full details on video…

Overall, CmdTab performs just as you would expect it would. Invoking it via Activator brings up an OS X styled app switcher with a few canned shortcuts. The shortcuts include the Settings app, Music, Twitter, Messages, WiFi settings and more.

Unfortunately, there’s just no way to customize the shortcuts, or for it to recognize the apps that you’ve recently used. If you’re okay with these intended shortcomings, then CmdTab may prove to be just what you need.

Let us know what you think about CmdTab in the comments below.