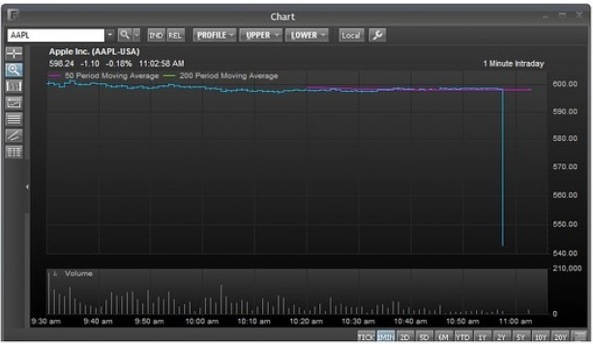 Trading of Apple shares has been briefly halted this morning. According to Business Insider, an errant trade caused the stock to crash a whopping nine percent, hitting a low of $542.80. Trading’s been resumed and AAPL opened at $598.39. The Apple stock trades on Nasdaq under the AAPL symbol…

According to Peter Kafka over at the Wall Street Journal’s MarketWatch blog, AAPL was halted for five minutes from 10:57am Eastern to 10:52am. It looks like “a fat-finger trade” is to be blamed for the incident, he wrote. A fat-finger trade, Fortune’s Philip Elmer-DeWitt educates us, is caused by someone hitting the wrong key.

CNBC explained on Twitter that “Apple had 1 trade at 10:57:36 that printed at $542.80. It was 100 shares and it traded on the BATS exchange”. Nasdaq canceled the erroneous Apple trades made on the BATS exchange as well. A spokesperson for BATS attributed the crash in their system to an issue with the matching engine.

BATS sent a notice about 10 minutes before the Apple trade saying it was investigating “system issues” affecting companies with ticker symbols ranging between A and BF. Apple’s is AAPL.

BATS is an electronic trading network that lets investors trade stocks outside of the major stock exchanges. Ironically, the BATS incident couldn’t have come at a worse time as they just went public today. According to Asymco analyst Horace Dediu, a cool $15.44 billion is being spent buying Apple shares every day. 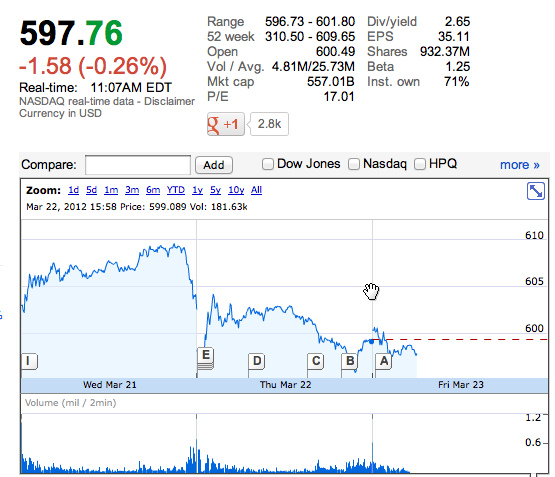 Apple is up more than 50 percent for the year. The company now accounts for 12 percent of the NASDAQ Composite index, which itself is up “only” 18 percent year-to-date. Thanks to its market cap just shy of $560 billion, Apple is now the world’s most valuable publicly-traded company.

Last week, Apple zoomed past the $600 a share mark, meaning a single share of Apple, Inc. was worth more at the time than a 32GB WiFi iPad 3. It was another lifetime high for the Cupertino, California-headquartered designer of gadgets (it seems to be doing that a lot lately).

Unfortunately, yours truly does not own shares of Apple nor of any other company.