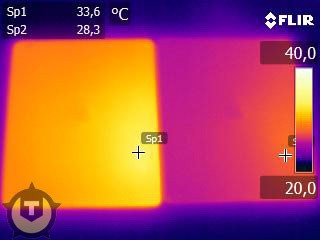 Yesterday, we told you about an unknown portion of new iPads overheating, with the lower left-hand corner of the device getting warm or noticeably hot. This was based on personal observations by numerous owners who took to Apple support forums to share their experience.

Now, a more scientific approach has confirmed that yes, the new iPads are indeed getting a little toasty. More precisely, the device on average runs 10 degrees hotter than its predecessor, the iPad 2. The finding is based on side-by-side thermal imaging of the new iPad vs. iPad 2…

An Apple spokesperson used the same argument defending the issue, telling The Loop:

But why excess heat? Running standard GLBenchmark that puts the GPU under strain and then putting the device under an infrared camera has allowed Tweakers.net to suggest that the new iPad’s souped up GPU is likely to blame for the overheating issue.

As you know, the device packs in the Apple-designed A5X package featuring an improved quad-core GPU (likely Imagination Technologies’ PowerVR SGX543MP4 unit), with benchmarks showing graphics performance comparable or exceeding that of Nvidia’s Tegra 3 chip. A teardown analysis has also revealed a new metal heat spreader atop the A5X chip.

Let’s not forget that the new iPad also has faster 4G networking and a stunning 2,048-by-1,536 pixel resolution Retina display, both battery-consuming and adding up to the overall power requirements. Apple tackled the increased power requirements by putting a lot bigger battery inside the new iPad with 70 percent more capacity than the iPad 2.

The company announced yesterday that it has managed to sell three million new iPads in under four days. For comparison, it took the original iPad 80 days to ship the same number of units, selling one millionth unit in 28 days following its April 2010 launch.