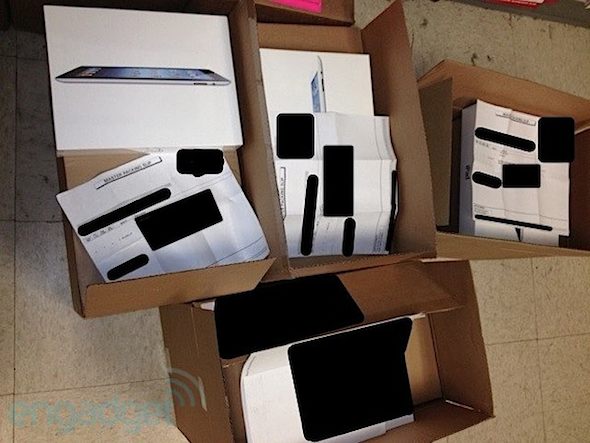 Even though some folks appear to be getting their new iPads early, the rest of us are stuck waiting until March 16th. Pre-ordered units are scheduled to start arriving this Friday. And the tablet is slated to hit retail stores the same day.

The good news is that if you plan on braving the lines this week, there are several retailers expected to be carrying the tablet on launch day. In fact, it looks like Best Buy has already started receiving inventory of new iPad units…

According to the folks over at Engadget, an anonymous tipster has sent them a photo of what appears to be new Retina display-equipped iPads. The site says the image was taken in the stock room of a US-based Best Buy.

This is interesting because typically, new Apple products are drop-shipped the night before launch day. And if they do arrive early, the packages are usually marked with strict instructions not to open until just before sale.

Regardless, these do appear to be new iPads. And if this small stack of boxes is any indication of what availability will be like at other retailers, you might want to go ahead and get in line at your local store now.