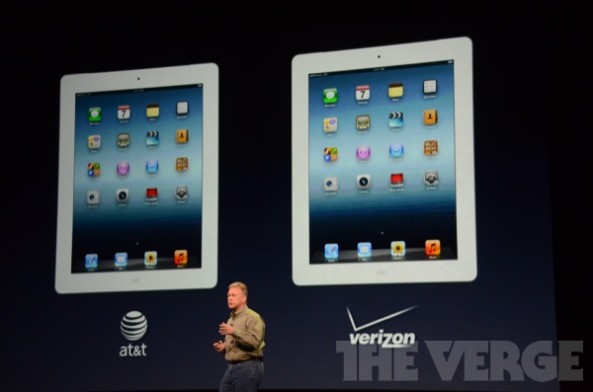 There was certainly some confusion earlier today regarding what the carriers’ plans are for the new iPad’s hotspot feature. The tablet, for the first time, will be compatible with high-speed LTE networks. And it will be to share the connection with up to 5 other devices.

As of right now, AT&T, one of the largest carriers in the US, has no idea when or if it will support the feature. But Verizon, on the other hand, has confirmed that its four data plans, starting at $20 per month, will all include free hotspot support…

Verizon’s $20 per month data plan will give you 1GB of usage. This plan wasn’t included on the original price guides we saw, but it appears that the carrier will indeed be offering it along with the 4G version of Apple’s new tablet.

The good news here as that Verizon will also be including the ability to share the iPad’s internet with other devices for no extra cost. That feature alone is almost worth the $20 per month just to use as a backup internet source. Remember, LTE is fast.

In comparison, AT&T’s data plans start at $15 per month for 250MB. And as aforementioned, it doesn’t look like the carrier will be supporting the iPad’s hotspot feature by launch day. So those planning to use it may want to give the Verizon model a second look.