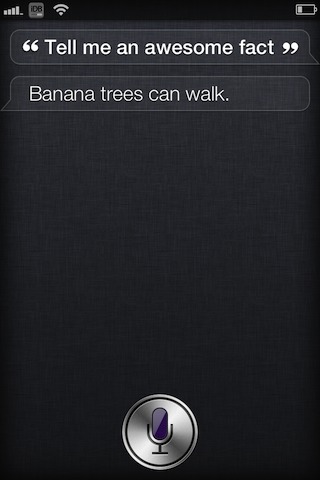 What’s the longest word that can be typed using a single row of the keyboard? Siri knows.

Awesome Facts for Chatbot/Siri is an AssistantExtensions add-on that turns Siri into a random fact spewing assistant.

Check out our hands-on video inside…

Other than the fact (pun intended for emphasis) that Siri had a hard time discerning “fact” from “fat”, the trivia hour was a pretty big success.

You will need AssistantExtensions in order to use Awesome Facts for Siri, as it is a add-on for that particular jailbreak tweak. Once you install it, invoke Siri and say “let’s chat” to invoke Chatbot. Once Chatbot is loaded, you can tell Siri to “tell me an awesome fact”. That’s when the fun starts.

Have you learned anything interesting from Siri lately? If no, then you definitely need to try this. Awesome Facts for Chatbot/Siri is free on Cydia’s BigBoss repo.