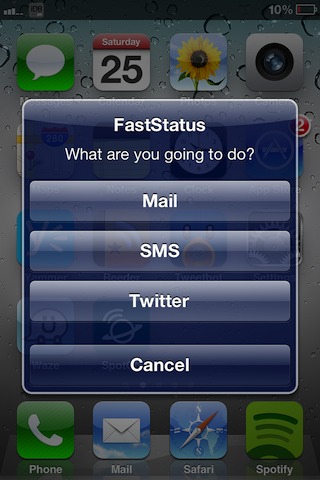 With everything going the route of iOS 5’s Notification Center, we’re seeing less and less tweaks that use Activator as a means for invoking, but FastStatus bucks that trend.

In fact, FastStatus’ ability to retain full compatibility with iOS 4 is one of the feathers in its cap.

This is a tweak that allows you to send email, text messages, and tweets from anywhere using a user assigned Activator action.

Check out our video walkthrough of FastStatus in action inside…

Once installed, head to the settings panel for FastStatus, which allows you to setup your method of activation — as usual I select a double tap of the status bar as my action of choice.

Hence, in my case at least, double tapping the status bar causes the FastStatus menu to appear. On it are quick links to compose a new SMS message, new email, or open the official Twitter app.

What I initially viewed as a downside — the fact that FastStatus is hardcoded to use the official Twitter app instead of the built in Twitter functions of iOS 5 — I quickly realized was not so much of a downside for users of older firmware.

The fact that FastStatus interacts directly with the Twitter app means that it retains full compatibility for iOS 4 users. Bummer for those who are on iOS 5, but overall, a decent compromise for those who still haven’t made the jump for whatever reason.

FastStatus is a free download on Cydia’s ModMyi repo, and as stated, you will need the official Twitter app installed for it to work with Twitter.