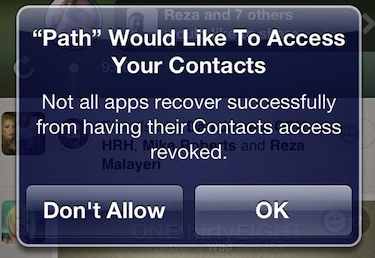 Apple and five other companies agreed today to new standards for showing users the privacy policies associated with apps offered in their app stores. The new agreement will improve privacy protection for customers around the world.

Attorney General Harris forged the agreement with six companies whose platforms comprise the majority of the mobile apps market: Amazon, Apple, Google, Hewlett-Packard, Microsoft and Research In Motion. These platforms have agreed to privacy principles designed to bring the industry in line with a California law requiring mobile apps that collect personal information to have a privacy policy. The majority of mobile apps sold today do not contain a privacy policy.

“Your personal privacy should not be the cost of using mobile apps, but all too often it is,” said Attorney General Harris.

Developers who break the agreement will be subject to California’s Unfair Competition Law and/or False Advertising Law. As part of the agreement Apple, and others, will release new ways of educating developers on good privacy practices. In six months, the Attorney General and the companies in the agreement will meet up to discuss app marketplace privacy.

In recent months, several apps have been under fire for taking user’s personal information without disclosing it. Path, and many others, were found to be uploading user’s address books without alerting them. This agreement will require developers to let users know about such moves.

The agreement also requires companies give customers a way to report apps that don’t comply with privacy requirements set in-place.

Do you think it was smart for Apple to sign this agreement?