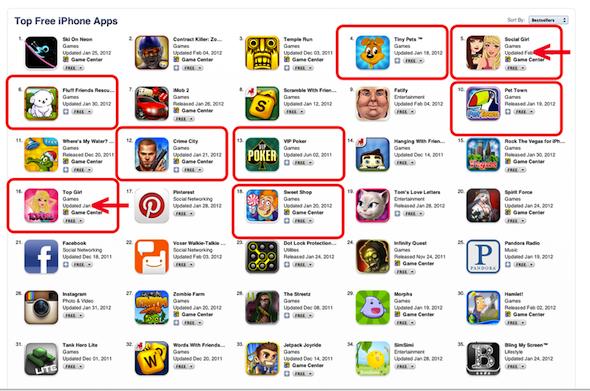 An interesting thread sprouted up in TouchArcade’s forums over the weekend entitled the “Biggest FRAUD in the Top 25 Free Ranking.” The thread spotlights a recently discovered problem with some app developers using seedy marketing services to move their apps up in the App Store rankings.

Walterkaman, who started the thread, said, “I came across this ad network which guaranteed to get my app into the Top 25 in the App Store for $5000.” The service uses bot farms to automatically download their clients’ apps to drive up their rankings. And not only does this work, but it works well…

Walterkaman points out that there are currently 8 apps (outlined in the above image) in the App Store’s Top 25 Free apps list using the aforementioned ad network. What’s worse is that Apple has known about this scam for a while, and has been extremely quiet on the matter. Until yesterday.

In response to the TouchArcade thread, and the media attention that followed it, Apple posted this message on its Developer site:

Once you build a great app, you want everyone to know about it. However, when you promote your app, you should avoid using services that advertise or guarantee top placement in App Store charts. Even if you are not personally engaged in manipulating App Store chart rankings or user reviews, employing services that do so on your behalf may result in the loss of your Apple Developer Program membership. Get helpful tips and resources on marketing your apps the right way from the App Store Resource Center.”

Apple has been putting forth quite a bit of effort over the last few months to clean up its App Store. Just last week we told you that the company was working to remove several misleading applications, and it’s also been actively fighting piracy.