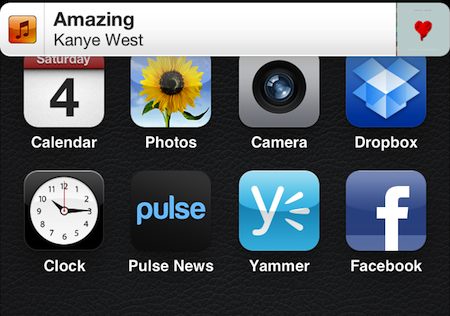 If you use the iPod app on your iOS device as much as I do, then you’re going to love the new jailbreak tweak: MusicBanners. The tweak, made by popular developer Ryan Petrich, brings your music to iOS 5’s notification system.

So what does it do? Essentially, MusicBanners sends you a notification every time a new track comes up on your iPod app. This means that you receive a notification with the track’s name, album and cover art after every song change…

As usual, Petrich’s tweak works flawlessly — both banners and notifications look and act like native iOS elements. And for those wondering, it doesn’t appear to be limited to the default iPod app. I can confirm that the tweak works with Pandora, and am assuming it works with other apps as well.

Even if you don’t think you’ll end up keeping it, MusicBanners is definitely worth a look. You can download the tweak from Cydia, in the BigBoss repo, for free.

What do you think of MusicBanners?