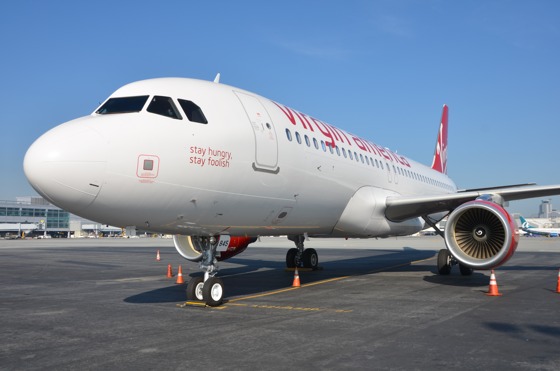 Apple’s co-founder and former CEO, the late Steve Jobs, was an inspirational figure for many people, with tributes flooding in after his death in October of 2011. People from across the globe, both inside the technology industry and out, all paid their respects in their own ways.

Now Virgin America has also paid tribute to the man that almost single handedly rescued Apple from an uncertain future when he returned to the company in 1997, with the airline having one of Jobs’ most memorable quotes emblazoned on one of its new airplanes.

“Stay Hungry, Stay Foolish” was a quote that Jobs gave during his famous Standford address in 2005, and has since gone on to become synonymous with Jobs himself. Now one of Virgin America’s new A320 airplanes has the same quote written in its side, too…

The full quote from the famous 2005 Stanford commencement speech goes something like this:

“On the back cover of their final issue was a photograph of an early morning country road, the kind you might find yourself hitchhiking on if you were so adventurous. Beneath it were the words: “Stay Hungry. Stay Foolish.” It was their farewell message as they signed off. Stay Hungry. Stay Foolish. And I have always wished that for myself. And now, as you graduate to begin anew, I wish that for you.”

Virgin America says the quote was chosen as part of an internal process, and with the airline being the only one based in Silicon Valley, it’s easy to see why a Steve Jobs quote finished top of the pile.