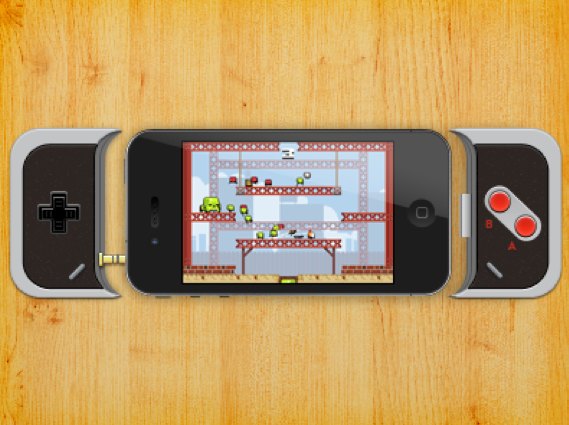 If the current batch of iPhone gaming accessories just aren’t doing it for you, perhaps this one will. This two-piece iPhone attachment essentially morphs your handset into a game controller that’ll remind you of the good old days.

But there’s more than nostalgia here. The NES-inspired controller actually looks like it could be the gaming add-on we’ve been waiting for. And although it’s still in the concept stage, the creator is working on bringing this thing to life…

The controller is the brainchild of Fabio Basile, a software engineer-turned-designer. The concept, which he originally posted on his Dribble page, has spent the last 24 hours going viral around the web.

“My ideal iPhone accessory! I hate digital buttons, this will be an immediate buy! Should we start a funding round on Kickstarter? :)”

Heck yes! We’d pledge money for this thing in a heartbeat. Unfortunately, Basile is in the UK, and Kickstarter currently only allows accounts from within the United States. And that’s not his only obstacle. He also admits that he knows nothing about neither hardware design nor iOS frameworks.

But that’s not enough to deter Basile, who says he is actively searching for help with his idea. He claims that there are elements to his controller that set it apart from current products, like iCade and iControlpad, that will ensure its success.

What do you think of the controller? Would you buy one?