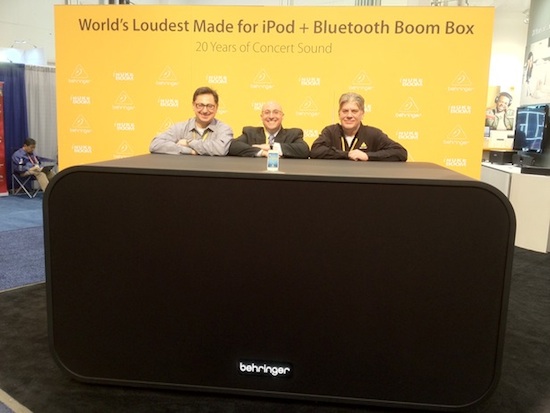 Last month we told you about one of the world’s largest and most expensive iPhone speaker docks: the iNuke Boom. Made by Behringer, the speaker weighs over 700 pounds and can pump out a staggering 10,000 watts of power.

Want to try it out? You can, if you happen to be in Las Vegas right now. Behringer has a working iNuke on hand at the 2012 Consumer Electronics Show, which has completely taken over Sin City this week…

In case you missed our first iNuke article, here’s a quick rundown of the specs. The speaker stands 4 feet tall, 8 feet wide, and as aforementioned, weighs in excess of 700 pounds. Its current retail price tag sits just $1 shy of 30K.

For those who aren’t at CES this week, Behringer has uploaded a teaser video to give folks a glimpse of iNuke’s power.

The speaker doesn’t appear to be available for purchase just yet, but Behringer says that it is in production. Expect the iNuke Boom to hit the market sometime in late 2012.

So, who’s getting one?