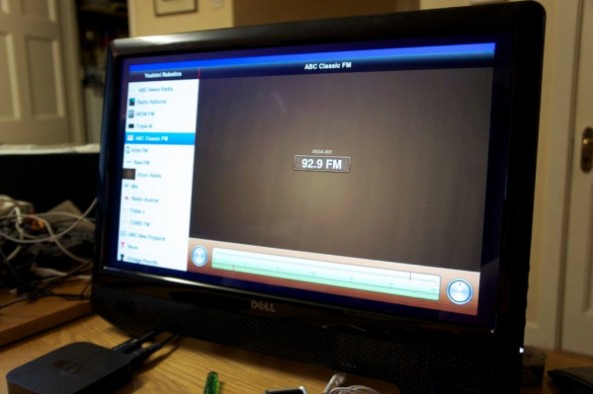 We’ve been keeping you up to date on the developments surrounding third-party iOS apps and the Apple TV. Steven Troughton-Smith has been working with other developers to bring all kinds of iOS apps to the jailbroken Apple TV with the hopes that Apple will open up access to the App Store for its set-top box.

The first app to be shown publicly for his project is Jackoplane’s Frequencies. As you can see, the app is running fullscreen on the Apple TV in the full 720p resolution.

Some beautiful AppleTV apps coming together right now; this one from @Jackoplane is nice : twitpic.com/835f17

While Frequencies is simply an IP-based radio turner, it’s neat to see apps like this coming together so soon. We can’t wait to see what Steven Troughton-Smith and his friends cook up for the jailbroken Apple TV!

If you recall, it was jailbreak apps that forced Apple to finally release the App Store for the iPhone. It’s time to do the same thing again with the Apple TV.

If you want to jailbreak your Apple TV with the latest untethered jailbreak, follow our tutorial.