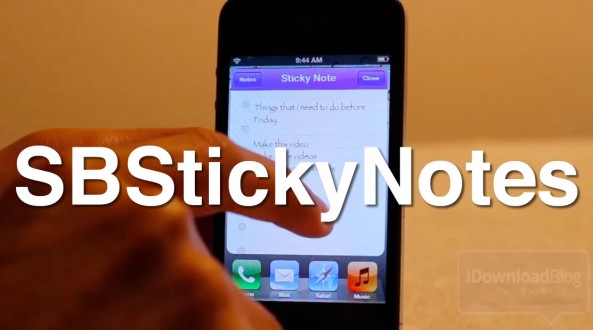 The Notes app is a great app for saving quick items that you need to get back to later, but often it’s easy to forget that you wrote anything down in the first place.

With SBStickyNotes, forgetting just became a tad more difficult. That’s because this tweak allows you to save favorite notes to you Home screen as a bookmark.

We’ve gone hands-on with SBStickyNotes on video; check inside to view the full walkthrough…

SBStickyNotes features a couple of options in the Settings app. One setting allows you to adjust the opening animation, while another allows you to change the color of the headings for your bookmarked notes.

For a free tweak, SBStickyNotes may prove to be extremely handy for those of you who take a lot of notes. I think it’ll prove to be even more instrumental for those who lack Siri and can’t set easy reminders via voice commands.

The only downside I found with SBStickyNotes is that you can’t actually edit a note from the bookmarked note on your Home screen. You have to go back into the Notes app to edit a note, which some may find as inconvenient.

If you want to give it a go and you have a jailbroken device, head over to Cydia where you can download it for free from the BigBoss repo.