The iPhone 4S was met with much criticism when Apple debuted the handset back in October. Some publications have even listed the device as one of 2011’s biggest flops, but sales have suggested otherwise.

In fact, according to popular marketing research firm comScore, the 4S has been so popular that it’s managed to push Apple’s US smartphone marketshare up more than 1% percent in the short time it’s been available…

comScore revealed in a report this morning that Apple’s smartphone marketshare rose to 28.7% in November — an increase of 1.7% over its August numbers. Its overall US mobile marketshare also grew, hitting an all-time high of 11.2%. 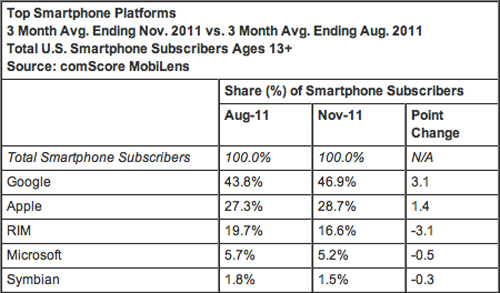 While 11.2% may not seem like much in comparison to Google’s marketshare of 46.9%, keep in mind that several manufacturers produce Android handsets. Apple only has three active iPhone models on the market.

Also note that these numbers don’t include December, a month in which Android/iOS devices set a single day record of 6.8 million activations. It’ll be interesting to see what the numbers for the next period, ending in February, look like.