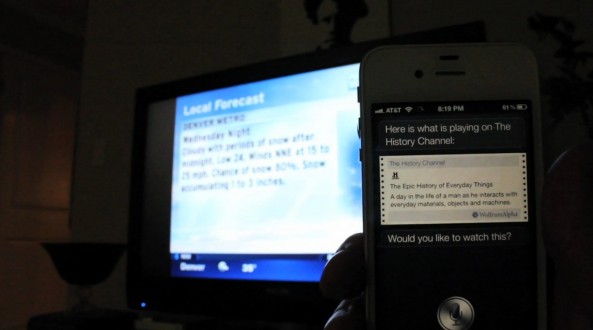 We’ve covered many examples of the SiriProxy in action. We even interviewed the man behind the networking hackery that has allowed people to use Siri to unlock their cars, control their rooms, and talk to their Macs.

There’s been a video example of Siri controlling a TV, but we’ve stumbled across a better video that integrates the TV experience with Siri in a more native way. With rumors circulating that Apple is looking to release a Siri-controlled TV set, we have a hard time figuring out how it could get much better than this setup by Todd Treece…

Todd’s Siri universal remote idea is made possible with the Arduino platform and the SiriProxy. The project’s Github page has all of the juicy, geeky details. It differs from the other videos we’ve seen, as this example shows Siri fully integrating with certain channels on the TV. Previously, Siri was used to integrate with third-party media server software, like Plex.

When imagining a television set that’s controlled by your voice, it makes perfect sense for your iPhone to become your universal remote. While many have speculated that Apple will totally do away with the remote when it does release a standalone TV set, we’re inclined to think that there will still need to be some sort of ‘remote’ device for interfacing with the big screen.

What better remote to use for Siri on your TV than the iPhone?