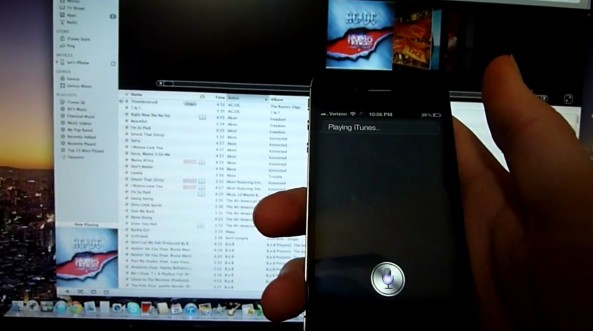 Barely 12 hours goes by without a handful of new SiriProxy plugins surfacing that blow our minds, and we’ve come across a few more that we thought might blow your minds, too.

Put together and shown off on YouTube by Ian McDowell, these new plugins bring the power of Siri to Google Voice on the iPhone, but more impressively, allow the launching of, and interaction with apps on a Mac. Sending messages using Google’s telephony app is one thing, but launching apps on your computer is a completely different one.

The control of a Mac towards the end of the five-minute video certainly has a Star Trek feel to it, even down to the “Computer” prefix added to Ian’s commands…

All this is made possible thanks to Pete Lamonica’s SiriProxy, which we’ve covered a few times already. The number of plugins that take advantage of Pete’s work gives us real hope for what Siri could do moving forward.

As the above video shows, Siri can already be hacked to launch and interact with a Mac app like iTunes. Basically, anything that can be done with AppleScript can be made to happen via your voice and Siri. Sound awesome? That’s because it is!

Also, we can’t be the only one’s replacing Ian’s voice in our heads with a “Scotty” accent from Star Trek, right?