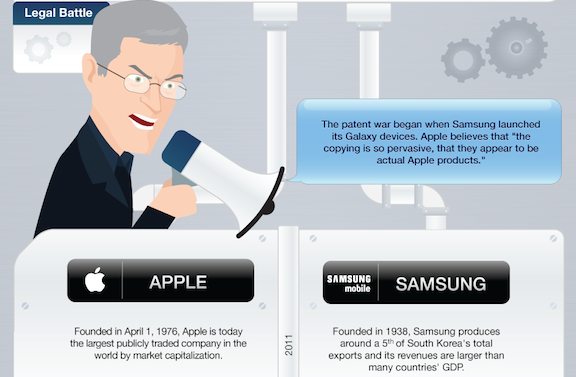 A lot has happened in the patent war between Apple and Samsung since the iPad-makers filed the original patent infringement suit earlier this year. Apple’s won a majority of the bouts, winning injunctions against Samsung’s products on multiple continents.

But with battles taking place in dozens of courtrooms around the globe, it’s hard to keep up with all of the action. Luckily, we’ve come across this handy infographic that helps explain some of the major events in the ongoing feud between the two companies…

The following image was created by the folks over at Online MBA Guide. Not only does it depict some of the major turning points in the Apple-Samsung patent war, but it offers some background information and other useful details on the two manufacturers.

Obviously, this infographic is missing some of the more recent events that have transpired over the last few weeks. For instance, Samsung just won an appeal lifting the temporary injunction that has kept it from selling its Galaxy Tab 10.1 in Australia for the last few months.

The company also recently won an important victory here in the States saving it from receiving another product ban. But the main court battles aren’t set to take place in Australia, the US, and other countries until early next year, so this whole thing is far from over.