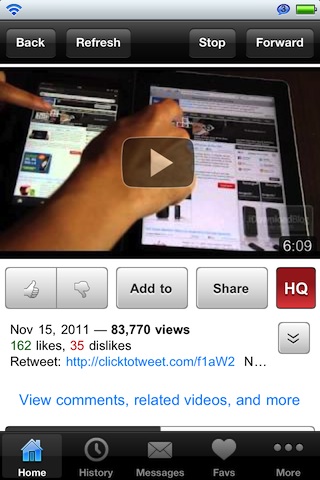 This ranks up there with one of the worst Cydia purchases I’ve ever made. MyMobileTube Pro sounds like it’s a professional app, but that couldn’t be anything further from the truth.

Obviously, it’s not a huge deal for me, because I do these walkthroughs for the benefit of our viewers and readers, but for some reason this one stung a bit more than others have in the past.

Maybe it’s the fact that this “app” is even more offensive than Google’s Gmail app, in that it’s nothing more than a wrapper around a webpage?

The sad news is that it’s not even a good looking wrapper. As you can see, MyMobileTube Pro is literally the equivalent of visiting m.google.com. Actually, scratch that; that’s doing mobile YouTube a disservice — it’s actually worse than visiting the website directly.

If you’re still not convinced, then you can head over to Cydia and cough up a dollar that would have been better spent blowing your nose. Don’t say we didn’t warn you.