ATARI is one of the biggest and oldest names in the gaming space. Apple co-founder Steve Jobs even worked there before starting Apple way back when, and all these years later ATARI is happily releasing some great games for Apple’s touch-based iOS devices.

The latest release to come out of the team at ATARI is Asteroids: Gunner, which the company describes as “a free-to-play, dual-stick action shooter for iPhone, iPod touch and iPad.”

Bringing a spot of the old arcade magic to the iDevices, Asteroids: Gunner is sure to be a real hit amongst those looking for a shooter that won’t break the bank, and with 150 waves of enemies, the game shouldn’t be one that’s over in a flash, either…

Players can pilot one of three crafts, choosing from the Miner, the Dart, and the Bomber, and will fly around three all-new galaxies while shooting various different asteroids and alien ships. 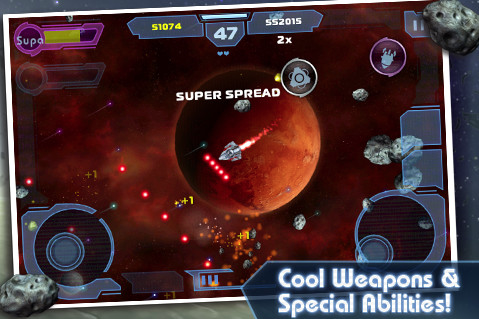 “Features include:
– Three all-new galaxies to explore and conquer, with 150 waves of asteroids and alien warships to obliterate
– Dual-stick controls for firing and movement, perfect for non-stop blasting action
– Access to three unique space crafts to pilot: the Miner, the Bomber and the Dart
– Legions of power-ups and upgrades to customize your ship and turn it into an unstoppable force
– Earn Crystals and purchase Space Bucks to unlock new galaxies and powerful upgrades
– An extensive achievement system that lets you earn ranks… and bragging rights
– OpenFeint and Game Center integration”

You can download Asteroids: Gunner for free from the App Store right now.