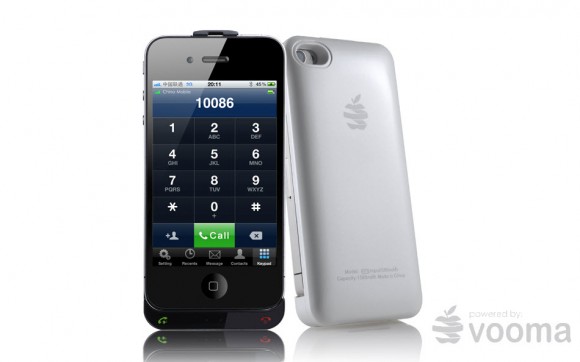 TechCrunch spotlights an interesting new case from the folks over at Vooma. The accessory adds a second SIM card slot to your iPhone. You might recognize some of Vooma’s previous work, which includes other iDevice products like the iPod touch Peel 3G case.

We’ve seen cases like this before, which add a second line to the handset via an integrated SIM card slot. But this is the first time that we’ve seen one that is compatible with the new iPhone 4S. Don’t get too excited though, as it does have one major caveat…

While Vooma’s Peel PG92 case works with the iPhone 4S, the handset has to be jailbroken for the second SIM slot to work. And as most of you know, there isn’t a public jailbreak yet for Apple’s new smartphone. But iPhone 4 owners might still find it appealing.

Here’s TechCrunch’s opinion after a hands-on with the PG92:

“The device itself consists of a back-up battery that can charge your phone and what amounts to a dumbed-down cellphone. When you jailbreak your iPhone and download the Vooma app, you can control the phone inside the case to make calls using the SIM card. In short, it charges, unlocks, and enables dual SIMs for your iPhone.”

Some of you may remember that Apple’s new iPhone was rumored to have built-in dual SIM card slots at one point. Admittedly, the feature would come in handy for folks who have both a work and personal cell phone, and don’t like toting around two devices.

For those who fit that criteria, Vooma’s Peel PG92 sounds like a decent offering. Especially since it also unlocks your handset. There is no set price or release date yet, but you can sign up for product updates on Vooma’s website for more information.

What do you think of Vooma’s Peel PG92 case? Interested?